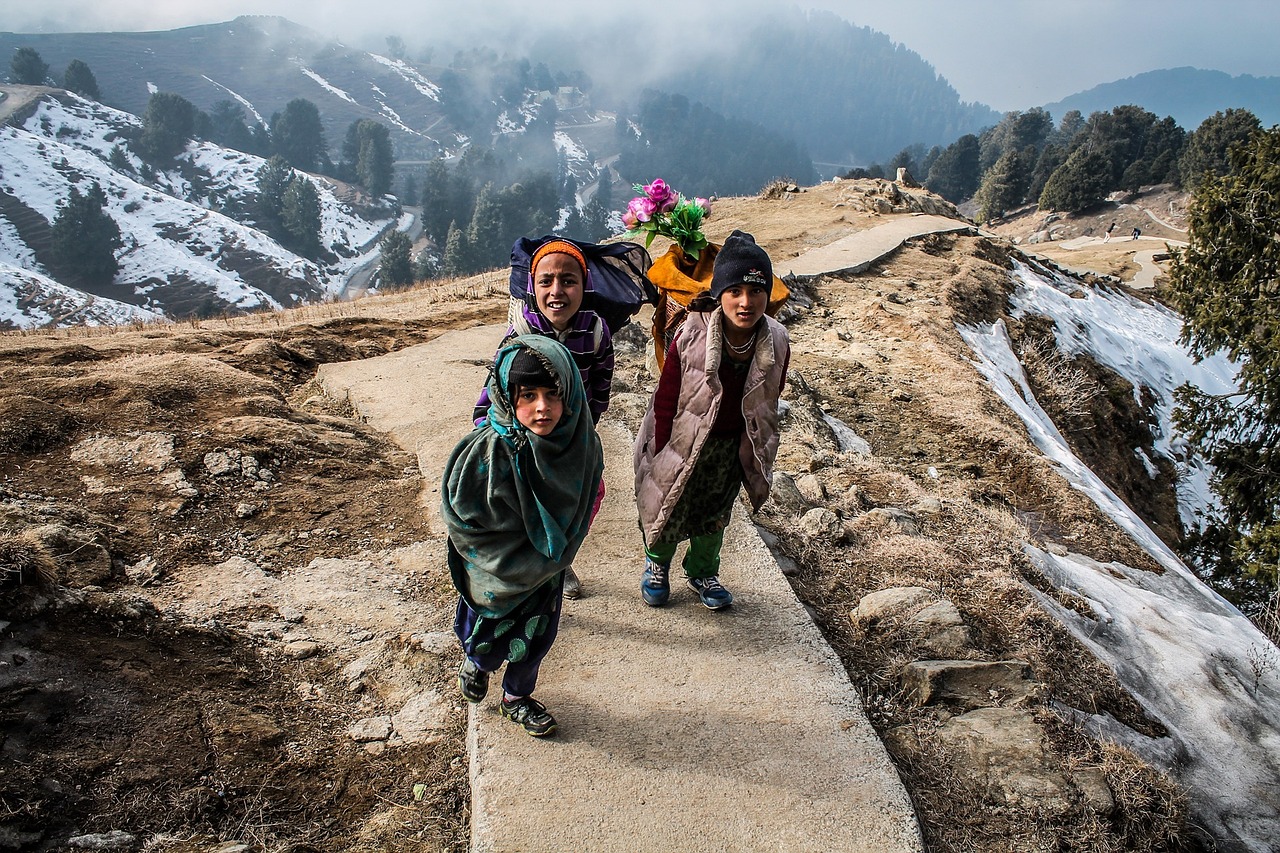 Little Himalayan girl with a Gold nose ring- Stories from the Mountains:

It was noon and the sun was bidding farewell to us. My sister and I decided to take brisk steps, so we could reach our grandmother’s place which was downhill. Arjun, who was also our fellow companion from the driveway to Kiara was already thrilled, as he could see his home, which was a km away from the road.

He invited us for tea because one needs to beat the cold in the mountains. So don’t be surprised to find a smouldering hot kettle, seated on the stove 24*7. We happily agreed to have tea as our legs were numb after traversing the treacherous winding slopes and rocks. I sat on the railing of the porch and watched the sky painting itself in dull colours.

It was 7 pm but when you are in the mountains, it equates to 11 since there is eerie silence everywhere. My sister looked at me and signalled me to leave. We left the place within fifteen minutes. As we took steady steps towards the other end of the unruly pathway. We realised that we don’t know where to head now, because to city-bred people like us — all mountain roads appear the same.

I moved in the opposite direction and my sister followed me. Only to realise that we were lost. We saw a typical traditional Pahadi House there. Two-three women were standing there, who were pointing at us. They were mumbling something but we weren’t sure if they were talking about us. So we retreated and now my sister took the lead.

She said let’s follow the trail that is straight up and after walking on the rocky path. We were assured that it was promising because we saw horse dung littered everywhere, on the ground. Since in the morning when we left for Kiara. The procession that we joined had a horse, which was decorated in the colours of spring.

We were walking on the dead leaves and could hear them being crushed under our feet. To break the subdued silence, I told my sister if today we’ll be lost in the woods. We will miss the tasty treat that is being served at our grandma’s place. She laughed and said, “No worry, at least the hounds in the jungle will be happy as they can slurp our bones”.

Not sure whether we will reach our home on time. We carried forward our journey in dismay, thinking we should have asked Arjun to come home with us. So we continued. I was crossing the treacherous stretch, which was so narrow that a wrong move could give you a prickly hug by the stinging nettle, known as ‘Kandali’ or ‘Bichhoo Ghaas’ in local language.

As the night was progressing, suddenly out of nowhere, I heard quick steps accompanied by jingling sounds of bangles. And in no time, a dusky girl clad in a purple kurta-salwar, with kohl smeared eyes was standing in front of me. I could barely see her face in the dark. But I did notice the gold nose ring, which was shining like a twinkling star from afar. It was decorating her nose just like it does to my sister.

She went ahead and said, “Didi why didn’t you stop when I was calling you from my house?”. I was amazed to see such vitality and friendliness coming from a little girl, who I never spoke to. She gleamed with joy and unlike other kids in my village, who aren’t fluent in Hindi. As their mother tongue is Garhwali, a dialect of the mountain region of Uttarakhand.

Surprisingly, this little girl had a great hold on the language and was highly enthusiastic while speaking it. She was taking long pauses, repeating “Haina” (isn’t so?) and “Didi” (elder sister) after every sentence. Her tone was lyrical and she was using a rhythmic sound while speaking it. I was happy to hear her and thankful that she came to rescue us.

I told her that we didn’t saw her there. She told us that she and her mother were waving at us from their house to invite us for tea. I was overwhelmed and impressed by her generosity. She had such grace when she talked. The girl with the gold nose ring told me that, she too went to Kiara with us on the same bus.

I looked carefully at her face and then realised, that I might have seen her. Since her face looked familiar and I’m good at remembering faces than names. She told us that she was worried whether we will reach safely or not. Since she noticed us taking the wrong path. Hence, she decided to help us so we can reach home safely.

Our grandma was throwing a feast that day so everybody from the village was invited. I requested her to stay there at night. But she told us, she’ll leave the house, once her parents come to take her. I agreed to it. We crossed the dusty mountain path and tossed the stones in the air.

My sister was quiet all the way but the girl was constantly talking. Although we were a little exhausted by climbing the terrains from dusk to dawn. But I wanted to make her feel happy about herself. So she continues sharing things and we both can soak up the moment.

When steep slopes emerged out of nowhere, she cautioned me to stay safe. At times, she tidied her dress and wrapped the shawl around her head. We successfully managed to cover half of the stretch. Now our destination was not too far.

The jungle in the midst bore an undying silence. The leaves of the lofty pines appeared as if they were polished by a blacksmith. The little lady told me, it is dangerous to move around in forests at night because you never know, which animal is prying on you and from where.

Check out: 10 Life Lessons I learned during my Stay in the Hills

She gave names of 4-5 animals which I never heard of. But I specifically remember one name which she said was kangaroo. I was amazed to hear about kangaroos in India. I knew they were natives to Australia but I didn’t correct her. However, I questioned her how it looked? She described an animal similar to kangaroo.

She even stated that the animal had a pouch in which her baby rests. I painted a picture of a Pahadi kangaroo and laughed in my head. She seemed confident sketching the image in my mind. I wanted her to stay in oblivion, because a young mind needs to liberate itself, from the superficial madness of the outside world.

I asked her whether these forests shelter porcupines. Because my grandfather used to bring its needles back home from the village and told us that kids in the village use them for writing. It was something that my tiny heart couldn’t contain, as I found it a dexterous job to do with. Since it would take a lot of time to write.

Her stories took me back to my childhood. Like the way, I used to sing and talk and see the world from a different perspective. It was 8:30 pm and we were at the door of our home. The pup wagged its tail and greeted us. The girl quickly went upstairs and started talking to her friends.

It was the first time; I saw her face as it was now exposed to the light. She had a very charming face like that of a veteran actress. Deep set eyes outlined by kajal, slender nose, and small lips. She was as beautiful from outside as she was within. I acted as if, I wasn’t listening to their conversation but actually I was.

The girl was asking her friends, who were my nieces and cousins that why did they leave us behind? They could have got lost. I was smiling at her graciousness and kindness towards us. I told her that we all came together on the bus but we stopped at Arjun’s place for a while. She smiled back. I wanted to talk to her and thank her but my mother called me. When I freed myself, it had been a couple of minutes or so. The kids dispersed and the room was empty.

I didn’t saw her at the feast and neither the day after when I was exploring the jagged terrains of Silkani (Tehri Garhwal). I cursed myself for not asking her name and not taking her picture because I didn’t want to make her feel uncomfortable. Her face is seized in my memory but I don’t know for how long.

So I etched her here because I don’t want her to be muddled by my imagination. I wish the Himalayan girl with the gold nose ring told me her name, so it would be easier for me to reach out to her. Until my next visit, she will stay here and breathe life in words.

If you liked Little Himalayan girl with a Gold nose ring- Stories from the Mountains…. then you might enjoy:

Share
Facebook
Twitter
Pinterest
WhatsApp
Previous articleSmall Friend Circle Benefits: Why few People choose to have a Small yet Powerful Circle
Next article30 Profound Quotes by Jiddu Krishnamurti on the Nature of Mind and Life
Pragati Chauhanhttp://melodyofwords.com
I am a soulful woman who loves to conjure up my thoughts and write. I thoroughly enjoy creating art and expressing myself through words. I believe words have a certain kind of melody that can be understood by everybody.
RELATED ARTICLES
Stories

Him, I & the Man with the Saddest Eyes- Mystery Man Story