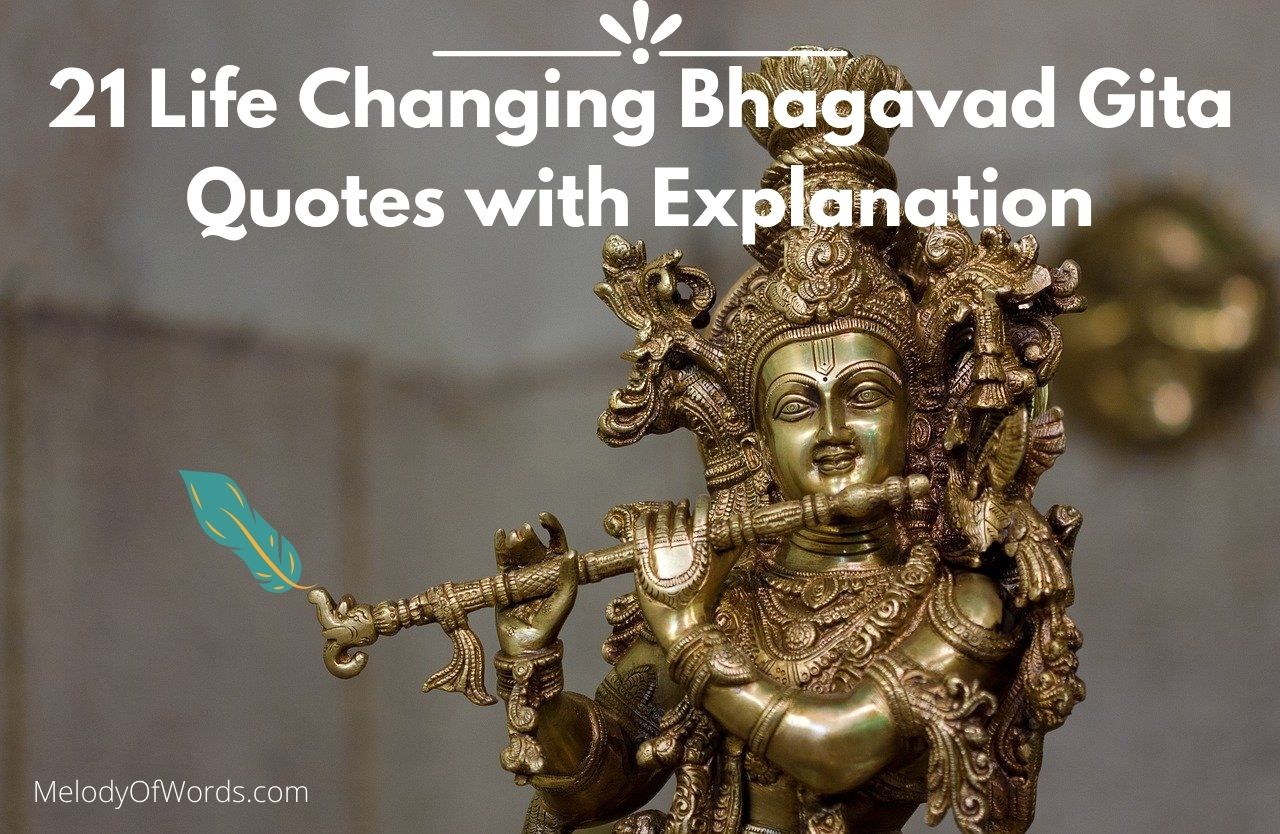 Bhagavad Gita is one of the most eye-opening and life-changing scriptures you will ever read in your lifetime. It is full of wisdom and contains every deep advice you will ever need to combat problems in life, and to annihilate inner demons.

Although it belongs to Sanatana Dharma (Hinduism) but the wisdom it contains is beneficial to every human being. Shreemad Bhagavad Gita is a part of the epic Mahabharata. The book contains 700 verses and is revered by Hindus as well as seekers from all walks of life, culture, and people belonging to different nations and religions.

If you wish to imbibe the qualities of Lord Krishna, and his wisdom then you should read these 21 Life Changing Bhagavad Gita Quotes with Meaning Explanation.

What is Bhagavad Gita:

Shreemad Bhagavad Gita is a lyrical ballad, or a combination of poetic verses also known as “shlokas” written originally in the Sanskrit language. It contains 700 verses which are structured into several ancient Indian poetic meters, with the principal being the shloka (Anushtubh Chanda).

Bhagavad Gita is compiled into 18 chapters, each shloka consists of a couplet, while the entire text consists of 1,400 lines.

The Bhagavad Gita regarded as “The Song of God” dates back to the second century BCE. It is a narrative framework of a dialogue between Pandava Prince and warrior “Arjuna” and his teacher/guide and charioteer “Lord Krishna.”

Gita is one of the most popular and influential spiritual literature, discourse or treatise in eastern philosophy. It has been translated into more than 75 languages worldwide, there are more than 300 translations in English alone.

In Hinduism, the Bhagavad Gita is considered as an important scripture, which guides us on how to get out of the cycle of birth and death to attain moksha. It is believed that anyone who recites Bhagavad Gita or chants the shlokas from Shreemad Bhagavad Gita religiously will get rid of their past sins.

Reading shlokas or quotes from Gita will bring peace and contentment in your life, so here are 21 Life Changing Bhagavad Gita quotes for you.

1. “That one is dear to me who runs not after the pleasant or away from the painful, grieves not, lusts not, but lets things come and go as they happen.”

Explanation: Lord Krishna says that the person who doesn’t let anything control him, is dear to him (God). He accepts everything just the way things are. He accepts pleasure if it comes his way, accepts sorrow without complaining and doesn’t crave for lust, money and materialistic pleasurers but accepts them with gratitude.

2. “There are three gates to this self-destructive hell: lust, anger, and greed. Renounce these three.” – Bhagavad Gita Quotes

Explanation: If a person craves for lust, it occupies his mind and he ruins his life in the process. Similarly if he lets anger and greed control his actions, his destruction is near. These three are the pathways to self-destruction.

3. “Calmness, gentleness, silence, self-restraint, and purity: these are the disciplines of the mind.”

Explanation: If you find peace and happiness in calmness, gentleness, self-restraint and purity then no doubt you are leading an amazing life away from the rat race. These are disciplines of mind and one should practice them everyday.

4. “Those who cannot renounce attachment to the results of their work are far from the path.” – Bhagavad Gita Quotes

Explanation: One should always be focused on his/her work and actions (Karma) and should not crave for the result. If you mind is always thinking about the result then the efforts you are putting in, will not be worthwhile because your focus is always on the result but not on the process or your actions.

5. “Actions do not cling to me because I am not attached to their results. Those who understand this and practice it live in freedom.”

Explanation: One should always focus on his actions (karma) and should not be attached to the result. This approach will lead you to the freedom because you don’t care about the result, all you care about is putting in your 100 percent.

6. “When one’s mind dwells on the objects of Senses, fondness for them grows on him, from fondness comes desire, from desire anger. Anger leads to bewilderment, bewilderment to loss of memory of true Self, and by that intelligence is destroyed, and with the destruction of intelligence he perishes.” – Bhagavad Gita Quotes

Explanation: If you grow the fondness of using your senses for pleasure within you then your mind is occupied by desire and too much desire leads to anger and in anger one loses his/her true consciousness and in turn loses his intelligence.

7. “The ignorant work for their own profit, Arjuna; the wise work for the welfare of the world, without thought for themselves.”

Explanation: Lord Krishna says to the great warrior Arjuna in the battlefield of Kurukshetra, that the person who works for his own profit is an ignorant and wise men work for the welfare of their society and the world. They work on making the world a better place to live in day by day.

8. “The offering of wisdom is better than any material offering, Arjuna; for the goal of all work is spiritual wisdom.” – Bhagavad Gita Quotes

Explanation: If you have the gift of wisdom then you are the richest person in the world. Wisdom is far greater than any momentary pleasure that material world can provide. The goal should be to enhance your own soul and thus the world. Any betterment starts with the betterment of yourself.

9. “Even if you were the most sinful of sinners, Arjuna, you could cross beyond all sin by the raft of spiritual wisdom.” – Bhagavad Gita Quotes

Explanation: No matter if you were a sinner, if you attain the spiritual wisdom at the end, that is what matters the most.

Explanation: One should always accept the fact that everything is temporary and everyone is going to die sooner or later including you. Then only you become wise and accept without regretting when your loved ones leave the world.

11. “He is full with contentment, who absorbs all desires within, as the brimful ocean remains unmoved(unchanged) by waters entering into it-not he who lusts after desires.” – Bhagavad Gita Quotes

Explanation: Desire make you a slave. Only that person is free in the true sense who doesn’t crave for any desire. Just like the ocean remains unchanged you throw some water droplets in it, it absorbs them. Similarly, one should absorb all the desire and experience freedom in the true sense.

12. “Equalizing (by even mindedness) happiness and sorrow, profit & Loss, triumph & failure- so you encounter the battle, thus you will not acquire sin.” – Bhagavad Gita Quotes

Explanation: A wise man should never become over-joyed at his victory over his senses, for then he might relax his efforts and try to runover the thin ice of deficient self-control and consequently fall into deep waters of temptation. Until the final victory is gained (keeping yourself detached from the result), no moral man should be overconfident or over-excited. Nor should he be despondent during temporary lack of self-control and thus acknowledge defeat.

13. “He who is everywhere non attached, neither joyously excited by encountering good nor disturbed by evil, has an established wisdom.” – Bhagavad Gita Quotes

Explanation: One should not be attached to anything either its good or bad for everything is temporary. Attachment eventually leads to disappointment. Krishna says you should never be exited if joy comes your way and never be disturbed if something bad happens. Accept them with arms wide open. This is true wisdom.

14. “Without craving for honour, free from delusion and malignant attachment, all longings banished, disengaged from the pair of opposites- pleasure and pain- ever established in the self, the undeceived attain the immutable state.”

Explanation: Do your karma totally and be don’t attach yourself to results such as honour. Disengage yourself from the desire of pleasure and pain to attain the moksha.

15. “Lust, anger, and greed-these constitute the threefold gate of hell, leading to the destruction of the soul’s welfare. These three, therefore, man should abandon.” – Bhagavad Gita Quotes

Explanation: Lust, anger and greed are your enemies. If you have them you will never be happy in true sense. Detach yourself from desire because if it doesn’t gets fulfilled, it leads to anger. Anger in turn ruins your intelligence and do no let you think straight.

16. “Meditative communion with one’s own true self, and uttering words that cause no agitation and that are truthful, pleasant, and beneficial, are called the austerity of the speech.” – Bhagavad Gita Quotes

Explanation: To have a therapeutic and soulful connection with your true self, you must practice good speech, and use words that don’t cause anxiety, are deceitful, have no value or are negative in nature. If you say good things, use a sweet sounding pleasant tone then it brings discipline in speech. When that happens your tongue gets tied along with your mind.

Because then your mind knows such thoughts are harmful, rubbish and serve no purpose in anyone’s life. The austerity in speech has a connection with your mind, both works in harmony. So practice good speech, be humble and polite. – Bhagavad Gita Quotes

17. “That Yogi who is gladly absorbed in truth and self realization is said to be indissolubly united to spirit. Unchangeable, conqueror of senses, he looks with an equal eye an earth, stone and gold.”

Explanation: The person who practices Jnana yoga and is devoted to self realization, conquers all the sense and becomes united with his soul. He then looks every human being and animal with equality and love without any ulterior motive. He becomes liberated to all the bondages and witnesses freedom in true sense.

18. “The meaning of Karma is in the intention. The intention behind the action is what matters. Those who are motivated only by desire for the fruits of action are miserable, for they are constantly anxious about the results of what they do.” – Bhagavad Gita Quotes

Explanation: Karma means action but the intention behind that action matters the most. If you do something by just being attached with the result to come, it will lead to misery because you will always be worried about the result, which will effect your efforts. The lord Krishna says devote yourself to the process and leave the result to him.

19. ”No one who does good work will ever come to a bad end, either here or in the world to come.” – Bhagavad Gita Quotes

Explanation: A good human being with good karma (selflessness towards every human being and animal) will never have a bad ending. He will always get what he deserves in every life.

Explanation: Atman (your inner self) is bigger than your ego, intellect, mind and body. Forget the ego and let the Atman take over. – Bhagavad Gita Quotes

21. “At the beginning of time I declared two paths for the pure heart: jnana yoga, the contemplative path of spiritual wisdom, and karma yoga, the active path of selfless service.” – Bhagavad Gita Quotes

Explanation: To purify your heart and soul and to attain moksha, you can either practice jnana yoga or karma yoga. Jnana yoga is a process of spiritual inquiry and self realization to attain moksha (liberation) and karma yoga is a form of yoga to do selfless service to other living beings (humans and animals as well). The third path to moksha is Bhakti yoga.

If you liked Bhagavad Gita Quotes: 21 Life-Changing Quotes with Explanation and Meaning…. then you might enjoy: