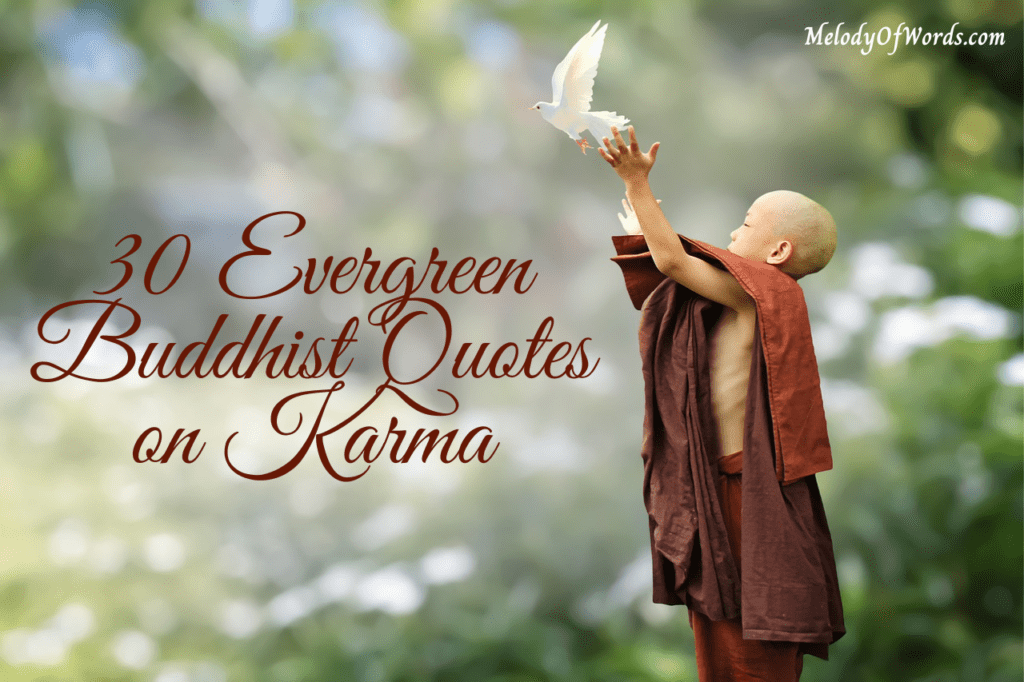 The word karma is derived from the Sanskrit language which means “action” or “doing.” Karma is like a measuring scale, which keeps a check on our negative and positive deeds. And gives us results based on the outcome of our actions, whether it is good or bad.

The karma theory in a nutshell explains that— all our actions no matter how small or big have some consequences. These consequences can be either rewardable or punishable, depending on the nature of our actions.

Some people believe in karma while others don’t, but the religious philosophies of Hinduism and Buddhism strongly support its existence.

According to the dharma texts of these two religious philosophies, a person’s karma can be good or bad depending on the quality of work, actions, and deeds of that person.

To simplify it, if a person constantly sends negative vibrations to the universe through his actions, then he will be punished for it because of his bad karma. On the contrary, if his actions are kind and his deeds are pure, then it is his good karma, and he will be rewarded for it by the universe.

What Buddhist Philosophy tells us about Karma:

In Buddhism, karma refers to action driven by intention, which can have future implications. Those intentions are considered to be the determinant factor in the cycle of rebirth. Since Buddhism supports the idea of rebirth or reincarnation, therefore a person’s actions in his past life can have a significant effect on his present life.

According to Buddhism, a person’s karma is the spiritual force created by that individual which will determine— how his next life will be like, whether he will flourish or perish in his next life.

Therefore, if your actions are cruel and your intentions are impure then, your next life or future will be full of suffering.

The Buddhist karma theory, also teaches us, that if a person has committed sins in his past life by engaging in gruesome activities that have caused mental, emotional or physical pain to living beings. Then he will be punished for his bad karma in his present life.

Every action has an Outcome because there’s Karma:

Buddhism stresses on the theory of karma explaining us, that our past actions affect our present life, and our present actions will affect us in the future or next life.

So be careful of your actions as the implications can be terrible, be a good human being, and practice kindness because it is the only way to peaceful living.

1. “Surely if living creatures saw the results of all their evil deeds, they would turn away from them in disgust. But selfhood blinds them, and they cling to their obnoxious desires. They crave pleasure for themselves and they cause pain to others; when death destroys their individuality, they find no peace; their thirst for existence abides and their selfhood reappears in new births. Thus they continue to move in the coil and can find no escape from the hell of their own making.” – Gautam Buddha, Buddhist Quotes on Karma

3. “Once you know the nature of anger and joy is empty and you let them go, you free yourself from karma.”- Gautam Buddha

4. “One who previously made bad karma, but who reforms and creates good karma, brightens the world like the moon appearing from behind a cloud.” – Gautam Buddha

6. “Not even death can wipe out our good deeds.” – Gautam Buddha

8. “Those who are free of resentful thoughts surely find peace.” – Gautam Buddha

9. “Just as one can make a lot of garlands from a heap of flowers, so man, subject to birth and death as he is, should make himself a lot of good karma.” – Gautam Buddha, Buddhist Quotes on Karma

10. “One who previously made bad karma, but who reforms and creates good karma, brightens the world like the moon appearing from behind a cloud.” – Gautam Buddha, Buddhist Quotes on Karma

11. “Dangerous consequences will follow when politicians and rulers forget moral principles. Whether we believe in God or karma, ethics is the foundation of every religion.” – Dalai Lama, Buddhist Quotes on Karma

12. “From the scientific view, the theory of karma may be a metaphysical assumption — but it is no more so than the assumption that all of life is material and originated out of pure chance.” – Dalai Lama, Buddhist Quotes on Karma

13. “Irrespective of whether we are believers or agnostics, whether we believe in God or karma, moral ethics is a code which everyone is able to pursue.” – Dalai Lama, Buddhist Quotes on Karma

14. “The universe that we inhabit and our shared perception of it are the results of a common karma. Likewise, the places that we will experience in future rebirths will be the outcome of the karma that we share with the other beings living there. The actions of each of us, human or nonhuman, have contributed to the world in which we live. We all have a common responsibility for our world and are connected with everything in it.” – Dalai Lama, Buddhist Quotes on Karma

15. “From a Buddhist point of view, the actual experience of death is very important. Although how or where we will be reborn is generally dependent on karmic forces, our state of mind at the time of death can influence the quality of our next rebirth. So at the moment of death, in spite of the great variety of karmas we have accumulated, if we make a special effort to generate a virtuous state of mind, we may strengthen and activate a virtuous karma, and so bring about a happy rebirth.” – Dalai Lama, Buddhist Quotes on Karma

Also Read: 30 Profound Quotes by Jiddu Krishnamurti on the Nature of Mind and Life

16. “The way of presentation is different according to each religion. In theistic religions like Buddhism, Buddhist values are incorporated. In nontheistic religions, like some types of ancient Indian thought, the law of karma applies. If you do something good, you get a good result. Now, what we need is a way to educate nonbelievers. These nonbelievers may be critical of all religions, but they should be decent at heart.” – Dalai Lama, Buddhist Quotes on Karma

18. “Regardless of what we do, our karma has no hold on us.” – Bodhidharma

19. “Not engaging in ignorance is wisdom.” – Bodhidharma

20. “If we should be blessed by some great reward, such as fame or fortune, it’s the fruit of a seed planted by us in the past.” – Bodhidharma, Buddhist Quotes on Karma

21. “Regardless of what we do, our karma has no hold on us.” – Bodhidharma

22. “A buddha is an idle person. He doesn’t run around after fortune and fame.”

Also Read: J. Krishnamurti Quotes from the Book “Freedom From The Known”

23. “Beings suffer injury alike From lifeless things as well as living beings. So why be angry only with the latter? Rather let us simply bear with harm. Some do evil things because of ignorance, Some respond with anger, being ignorant. Which of them is faultless in such acts? To whom shall error be ascribed?

Instead, why did they act in times gone by That they are now so harmed at others’ hands? Since everything depends on karma, Why should I be angry at such things? This I see and therefore, come what may, I’ll hold fast to the virtuous path And foster in the hearts of all An attitude of mutual love.” – Śāntideva, The Way of the Bodhisattva, Buddhist Quotes on Karma

24. “To go from mortal to Buddha, you have to put an end to karma, nurture your awareness, and accept what life brings.” – Buddhist Quotes on Karma

25. “Every moment of your life, you perform action – physically, mentally, emotionally, and energy-wise. Each action creates a certain memory. That is Karma” – Sadhguru

26. “Karma is not in your action – it is in your volition. It is not the content of your life but the context that creates karma.” – Sadhguru

27. “You must acknowledge and experience this part of the universe. Karma is intricate, too vast. You would, with your limited human senses, consider it too unfair. But you have tools to really, truly love. Loving the children is very important. But love everyone as you would love your children.” – Kuan Yin, Buddhist Quotes on Karma

28. “One should, perform karma with nonchalance without expecting the benefits because sooner of later one shall definitely gets the fruits.” – Rigveda

29. “The path of bhakti, karma and love as expounded in the Gita leaves no room for the despising of man by man.” – Mahatma Gandhi

30. “Every act of charity, every thought of sympathy, every action of help, every good deed, is taking so much of self-importance away from our little selves and making us think of ourselves as the lowest and the least, and, therefore, it is all good. Here we find that Jnana, Bhakti, and Karma – all come to one point.” – Swami Vivekananda