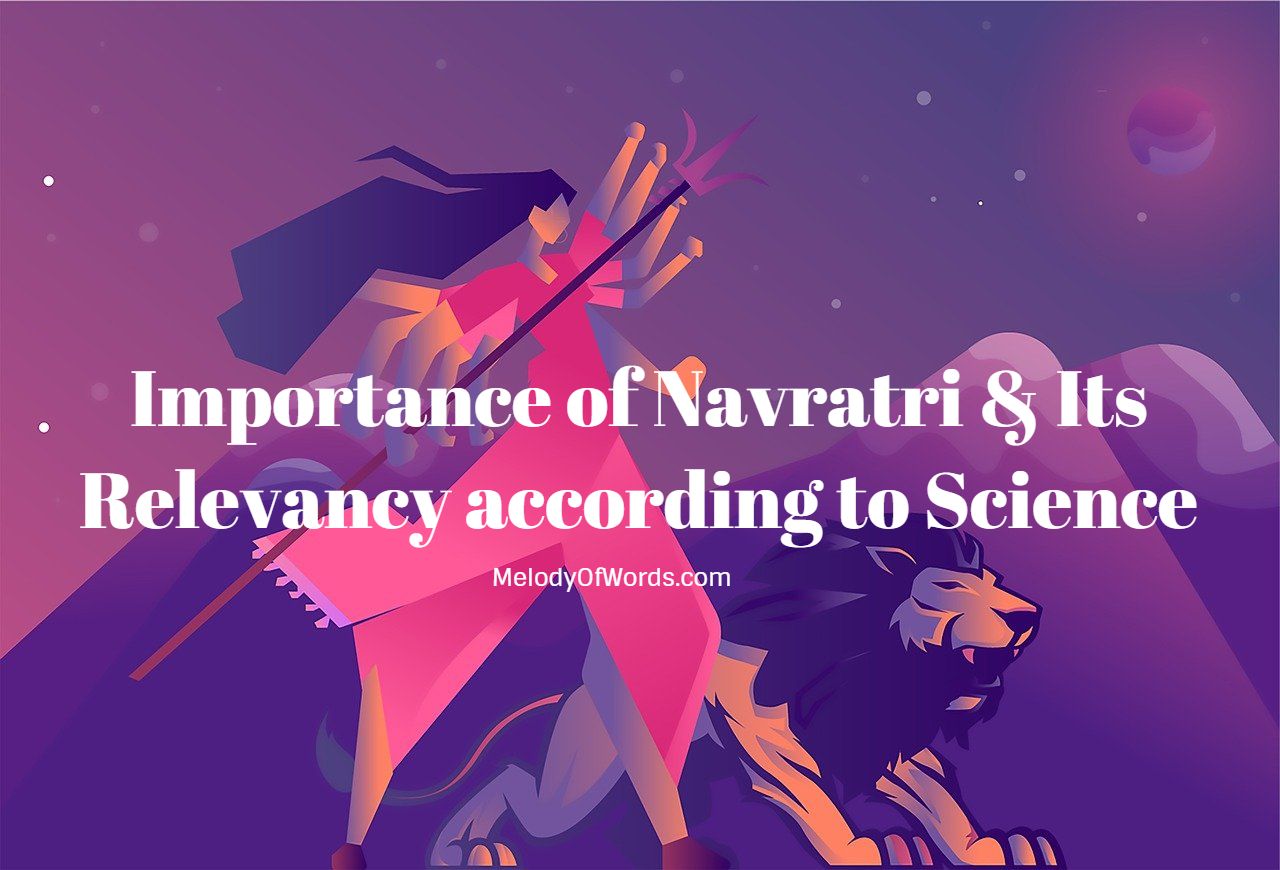 India is a land of diverse cultures and religions, that are practiced with great dedication and fervor. One such auspicious festival celebrated in India is “Navratri.”

Although Navratri is observed four times a year. However, in most parts of the country, it is mainly celebrated as a biannual festival. Once observed during the onset of summer and another during autumn.

Why Navratri Festival is celebrated:

If you have a sound understanding of Indic languages, then you’d know that Navratri is a word derived from Sanskrit, meaning “nine nights.”

This nine-day long Hindu festival is celebrated to honour the divine feminine energy of “Goddess Durga,” who slew the demon king ‘Mahishasura.’

Hence, people revere her as a mother, who protects and combats evil forces to restore peace and prosperity in the world. Leaving behind the message of dharma and karma, that are intertwined with each other.

Therefore, Navratri festival is celebrated as it marks the advent of Goddess Durga on Earth. Many devotees keep a nine-day long fast, pray and prepare special dishes, that are offered as bhoga to the nine avatars of Goddess Durga.

How Navratri Festival is Celebrated:

Navratri festival is known by different names in different states of India, and the rituals vary accordingly. The festival is celebrated as Durga Puja in Northeast India.

Whereas in the Northern and Western parts of India, it is observed by keeping a nine-day long fast. This is followed by staging “Ramlila” and concluding it with Dussehra, where the effigies of Ravana and his brothers are burnt to rejoice the victory of good over evil.

In the western part of India, Gujarat takes the lead, as the nine-days long fasting period of Navratri is followed by dandiya nights. Which is a gala event in itself, people dress up in colourful dresses, gather together, and dance until they run out of breath.

In South India, Navratri festival is celebrated by showing their artistic grandeur. People invite their family and friends to look at Kolu, which is an exhibition of various dolls and exhibition.

Scientific Reasons behind Fasting in Navratri:

In ancient times, people studied and observed the changes in season and their bodies. They were aware that their bodies have their own biological clock, which led to changes in energy levels.

Therefore, in India, the festivals and customs were made that incorporated healthy lifestyle changes, which strengthened the body and mind connection.

So let’s examine the scientific and spiritual significance of fasting during Navratri festival.

1. Detoxification of the Body:

Since Navratri is observed twice a year, during the two main junctures of seasonal change. It is one of the crucial times, when the body is the most vulnerable and susceptible to fall sick.

Therefore, fasting or having light food can help your body cells to produce more antioxidants, which helps in detoxing the waste material from the body. So it doesn’t cause any damage to the body.

“Fasting allows the gut to cleanse and strengthens its lining.”

Ayurveda also emphasizes on giving up foods like garlic, onion, meat, grains and eggs during Navratri. Since they are considered heavy and high-energy foods, that can cause inflammation and other digestive issues, as our immunity is low during this time.

Also Read: 30 Evergreen Buddhist Quotes on Karma to Teach you the Importance of your Actions

When we fast, our body uses fat as its prime source of energy because of the lack of carbohydrates in our diet. Since, the metabolic end product of fat is “ketone” and ketone bodies are the energy source of brain.

Therefore, it promotes more acetylcholine, an organic chemical that is released from nerves. Which helps in increasing one’s concentration power, calculation skills and spikes the production of serotonin also known as the “hormone for happiness.”

3. Harmony between Body, Mind and Soul through Prayer:

Praying, singing hymns, practicing meditation and not partaking in activities, that cause harm to any living being radiates positivity from within. It helps in cleansing our aura and restoring peace within ourselves. This further, helps in achieving mental peace and calmness.

There’s a direct relationship between fasting and self-discipline. As it brings the human body and mind to a more disciplined and ideal state. Because when we have the willpower to control our desires, we are liberated.

Therefore, by controlling ourselves from thinking about food and having it. We learn that we don’t live for eating but we eat for living. This helps us in making good food choices and in living a disciplined life.

During Navratri fasting we avoid certain foods even after opening our fast at night, which is generally done by eating light food or fruits.

Therefore, for nine continuous days, we avoid eating carbs, sugar and packaged food items. Which are the main culprit for causing inflammation in our body.

Thereby, helping us to achieve glowing and clear skin. Not to forget that losing weight is an added bonus of keeping a nine-day long fast during Navratri. You can fit into your favourite dress and flaunt your toned body.

Each of these nine energy centers line up along the central vertical axis of the human body. These nine chakras are associated with the nine divine power and consciousness.

Since during Navratri, we eat healthy, do not consume meat, do kind acts, engage in prayer and meditation. Therefore, it helps to align our chakras, which further helps us to get rid of lust, anger, greed, attachment, ego, fear and jealousy.

Fasting during Navratri helps us in having an overall good health in all the four dimensions of health— mental, physical, emotional and spiritual.

Having light food helps in eliminating digestive issues such as bloating and gas. It makes us feel light on our foot, improves mental clarity, we go through the day with a positive mindset, and feel connected to God by offering prayers.

It also gives us mental peace because we aren’t tempted to give into our desires of having unhealthy food. So stay blessed and enjoy the festival of Navratri to the fullest.

If you liked Importance of Navratri Festival in Indian Culture and Its Relevancy according to Science, then you might like: