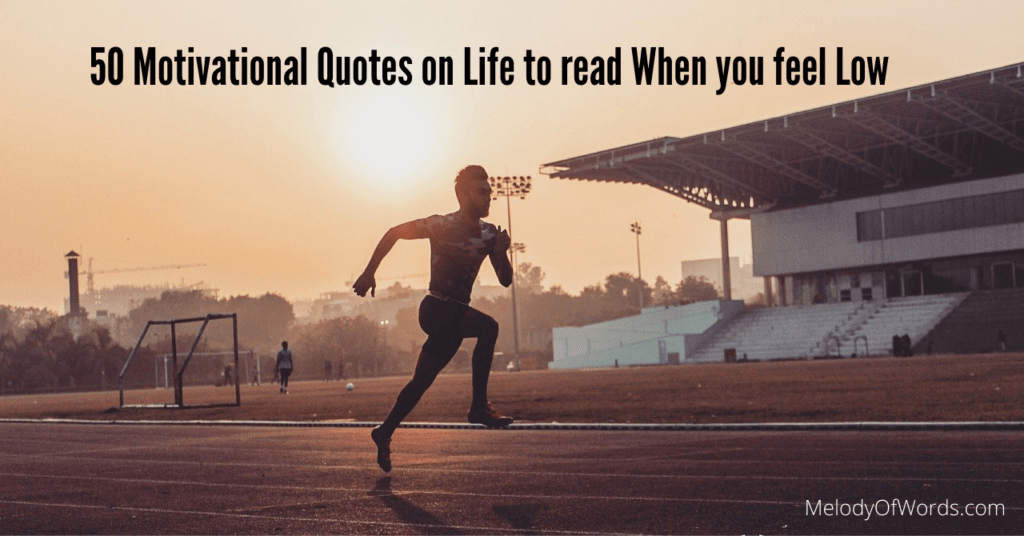 Life is all about the survival of the fittest, if you are living on this planet, then it means you have to hustle to make ends meet. Since nobody had it easy because circumstances can change within a fraction of seconds, and even your best laid-out plans can collapse like a house of cards.

Time is relative and there’s uncertainty of situations. Therefore, one needs to keep himself motivated to face future challenges and to accomplish goals, which can only be possible if you have a winner’s mind-set.

So do not feel lonely in your journey, because many winners have walked through the same deserted pathways. And have found their way to success through self-motivation.

If you are feeling demotivated, and want a dose of motivation to stay focussed on your goals. Then you must read these 50 motivational Quotes on Life.

Since these motivational quotes are a reminder of the struggles faced and conquered by the hustlers. Who wish to share their wisdom with other hard-working individuals like you.

Because when you are lacking motivation, you just need a gentle push to keep moving forward. So let’s dive into the list of ~ 50 Motivational quotes on Life to Train your Brain to not Give up!

50 Motivational Quotes on Life to read When you feel Low

1. “We Generate Fears While We Sit. We Overcome Them By Action.” – Dr. Henry Link

2. “We May Encounter Many Defeats But We Must Not Be Defeated.” – Maya Angelou

3. “Security Is Mostly A Superstition. Life Is Either A Daring Adventure Or Nothing.” – Helen Keller

5. “Fake It Until You Make It! Act As If You Had All The Confidence You Require Until It Becomes Your Reality.” – Brian Tracy, Motivational Quotes on Life

6. “One Of The Lessons That I Grew Up With Was To Always Stay True To Yourself And Never Let What Somebody Else Says Distract You From Your Goals.” – Michelle Obama

7. “The Best Way To Get Started Is To Quit Talking And Begin Doing.” – Walt Disney

8. “Don’t Let Yesterday Take Up Too Much Of Today.” – Will Rogers

Motivational Quotes on Life by Successful Athletes and Sportspersons:

9. A lion doesn’t concern himself with the opinions of the sheep.” – Lionel Messi

10. “The best decisions aren’t made with your mind, but with your instinct.” – Lionel Messi

11. “Your love makes me strong. Your hate makes me unstoppable.” – Cristiano Ronaldo

12. “You dream. You plan. You reach. There will be obstacles. There will be doubters. There will be mistakes. But with hard work, with belief, with confidence and trust in yourself and those around you, there are no limits.” – Michael Phelps, Motivational Quotes on Life

13. “I’ve missed more than 9,000 shots in my career. I’ve lost almost 300 games. Twenty-six times I’ve been trusted to take the game-winning shot and missed. I’ve failed over and over and over again in my life. And that is why I succeed.” – Michael Jordan

14. “The only person who can stop you from reaching your goals is you.” – Jackie Joyner-Kersee

16. “During my 18 years I came to bat almost 10,000 times. I struck out about 1,700 times and walked maybe 1,800 times. You figure a ballplayer will average about 500 at bats a season. That means I played seven years without ever hitting the ball.” – Mickey Mantle, Motivational Quotes on Life

17. “You are never really playing an opponent. You are playing yourself, your own highest standards, and when you reach your limits, that is real joy.” – Arthur Ashe

18. “People throw stones at you and you convert them into milestones.” – Sachin Tendulkar

19. “I will always remember the game for other reasons, because I learnt a very important personal lesson. It taught me never to resort to unethical ways and to play the sport with honesty and integrity at all times.” – Sachin Tendulkar, Motivational Quotes on Life

20. Whatever you want to do, do with full passion, and work really hard towards it. Don’t look anywhere else” – Virat Kohli

21. “When something is important enough, you do it even if the odds are not in your favor.” – Elon Musk

22. “Instead of freaking out about these constraints, embrace them. Let them guide you. Constraints drive innovation and force focus. Instead of trying to remove them, use them to your advantage.” – 37 Signals, Motivational Quotes on Life

24. “Don’t worry about being successful but work toward being significant and the success will naturally follow.” – Oprah Winfrey

25. “The credit belongs to the man who is actually in the arena; whose face is marred with dust and sweat; who strives valiantly, who errs and may fall again and again, because there is no effort without error or shortcoming.” – Theodore Roosevelt, Motivational Quotes on Life

26. “Life’s too short to hang out with people who aren’t resourceful.” – Jeff Bezos

27. “What we need to do is always lean into the future; when the world changes around you and when it changes against you – what used to be a tail wind is now a head wind – you have to lean into that and figure out what to do because complaining isn’t a strategy.” – Jeff Bezos, Motivational Quotes on Life

28. “Move fast and break things. Unless you are breaking stuff, you are not moving fast enough.” – Mark Zuckerberg

Also Read: 40 Most Inspiring Elon Musk Quotes that’ll Teach you to Think out of the Box

29. “Don’t compare yourself with anyone in this world… if you do so, you are insulting yourself.” – Bill Gates

30. “Don’t let the noise of others’ opinions drown out your own inner voice.” – Steve Jobs

31. “Have the courage to follow your heart and intuition. They somehow already know what you truly want to become.” – Steve Jobs

32. “If today were the last day of your life, would you want to do what you are about to do today?” – Steve Jobs

33. “Kill them with success and bury them with a smile.” – Leonardo DiCaprio

34. “If you have done the very best you can. worrying won’t make it any better. if you want to be successful, respect one rule.” – Leonardo DiCaprio

35. “I’ve always approached things with hunger and just enough fear. Plenty of confidence, you know, but just enough fear to work extra hard. Paralyzing fear does nothing, but the kind of fear that makes you nervous enough to really be aware and focused? I like that kind of fear.” – Queen Latifah, Motivational Quotes on Life

36. “Learn to live your life—there’s no recipe for it. You can’t go to acting school to learn to be a deep person with a lot of experience to draw from; you can only become that person by feeling, by getting hurt, by feeling incredibly happy, by seeing the world; those are the things that make you richer as a person and give you a much bigger bank to draw from when you bring characters to life.” – Pablo Schreiber, Motivational Quotes on Life

38. I think if you live in a black-and-white world, you’re gonna suffer a lot. I used to be like that. But I don’t believe that anymore. – Bradley Cooper

39. “I don’t believe in happy endings, but I do believe in happy travels, because ultimately, you die at a very young age, or you live long enough to watch your friends die. It’s a mean thing, life.” – George Clooney

40. “I don’t say: ‘can’t do that’, ‘won’t do that’. I’ve never thought in that way about work. The genuine truth, and I do think about this a lot, is that I’m one of the least competitive people you’ll ever meet. Except with myself.” – Daniel Craig, Motivational Quotes on Life

41. “I can’t think of any better representation of beauty than someone who is unafraid to be herself.” – Emma Stone

44. “If we could change ourselves, the tendencies in the world would also change. As a man changes his own nature, so does the attitude of the world change towards him. We need not wait to see what others do.” – Mahatma Gandhi, Motivational Quotes on Life

45. “Change is the law of life. And those who look only to the past or present are certain to miss the future.” – John F. Kennedy

46. “My dad always said, ‘Champ, the measure of a man is not how often he is knocked down, but how quickly he gets up.’” – Joe Biden

47. “Truth cannot be hidden for fear that somebody would exploit it.” – Atal Bihari Vajpayee

48. “Passion is needed for any great work, and for the revolution, passion and audacity are required in big doses.” – Che Guevara

49. “I learned that courage was not the absence of fear, but the triumph over it. The brave man is not he who does not feel afraid, but he who conquers that fear.” – Nelson Mandela, Motivational Quotes on Life

50. “Yesterday is gone. Tomorrow has not yet come. We have only today. Let us begin.” – Mother Teresa

If you liked Motivational Quotes on Life, then you might enjoy: