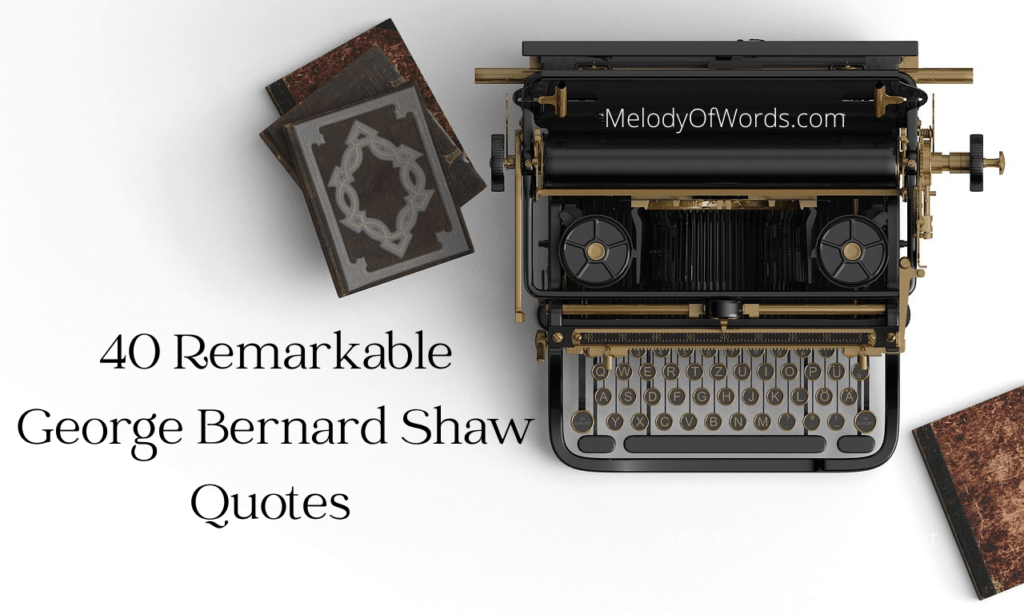 Shaw has penned famous plays including Man and Superman (1902), Pygmalion (1912) and Saint Joan (1923). His style of writing and wordplay is called as “Shavian,” which encapsulates the writer’s idea and self-expression.

Even to this day, Shaw’s work is relevant amongst British dramatists and English Literature laureates, who regularly vote him as second only after Shakespeare.

Let’s pay a homage to the great writer by reading and admiring some of the best George Bernard Shaw Quotes, that carry the essence of his writing.

Before hoping onto George Bernard Shaw quotes, here’s a short biography of the late writer.

G.B Shaw’s views were often vexed with political drama and attention. The writer used to disseminate his political, social and religious ideologies.

Shaw openly opposed vaccination and organized religions. His political stance was highly controversial since he favoured the dictatorship of the right and left, and expressed admiration for both Mussolini and Stalin.

G.B. Shaw was famous for including contemporary satire with historical allegory in his dramas, which made him a leading dramatist of his generation. For his outstanding contribution in the field of Arts & Literature, Shaw was honoured with the 1925 Nobel Prize in Literature.

In his lifetime Shaw wrote many critically acclaimed literary pieces, but it was his 1938 screenplay of Pygmalion, that made him reach the pinnacle of his success. He even received the Academy Award for writing it.

Shaw’s contribution to literature has had a major influence on western theatre, culture and politics. So let’s acknowledge G.B. Shaw’s work by reading ~ 40 Remarkable Quotes by George Bernard Shaw.

1. “Beware of the man who does not return your blow: he neither forgives you nor allows you to forgive yourself.”

4. “Take care to get what you like or you will be forced to like what you get.”

5. “Life contains but two tragedies. One is not to get your heart’s desire; the other is to get it.”~ George Bernard Shaw Quotes

7. “Those who talk most about the blessings of marriage and the constancy of its vows are the very people who declare that if the chain were broken and the prisoners left free to choose, the whole social fabric would fly asunder. You cannot have the argument both ways. If the prisoner is happy, why lock him in? If he is not, why pretend that he is?”

8. “This is the true joy of life-the being used for a purpose recognized by yourself as a mighty one, the being thoroughly worn out before you are thrown to the scrap-heap; the being a force of nature instead of a feverish, selfish clod of ailments and grievances.”

9. “A true artist will let his wife starve, his children go barefoot, his mother drudge for his living at seventy, sooner than work at anything but his art.”

10. “Civilization is a disease produced by the practice of building societies with rotten material.”

George Bernard Shaw Quotes from Arms and the Man:

13. “It is our duty to live as long as we can.”~ George Bernard Shaw Quotes

14. “Soldiering, my dear madam, is the coward’s art of attacking mercilessly when you are strong, and keeping out of harm’s way when you are weak.”

16. “You see, sleep or no sleep, hunger or no hunger, tired or not tired, you can always do a thing when you know it must be done. Well, that pipe must be got down…”

Also read: How to Deal with Rejection in Love like a Mature Individual

17. “I learned long ago, never to wrestle with a pig. You get dirty, and besides, the pig likes it.”~ George Bernard Shaw Quotes

18. “An asylum for the sane would be empty in America.”

19. “There is no sincerer love than the love of food.” ~ George Bernard Shaw Quotes

20. “Democracy is a device that ensures we shall be governed no better than we deserve.”

22. “A life spent making mistakes is not only more honorable, but more useful than a life spent doing nothing.”

25. “Beware of false knowledge; it is more dangerous than ignorance.”

27. “We are made wise not by the recollection of our past, but by the responsibility for our future.”

29. “Imagination is the beginning of creation. You imagine what you desire, you will what you imagine and at last you create what you will.”

30. “A happy family is but an earlier heaven. ~ George Bernard Shaw Quotes

32. “Without art, the crudeness of reality would make the world unbearable.” ~ George Bernard Shaw Quotes

33. “Patriotism is your conviction that this country is superior to all others because you were born in it.”

34. “The power of accurate observation is commonly called cynicism by those who have not got it.” ~ George Bernard Shaw Quotes

35. “The worst sin toward our fellow creatures is not to hate them, but to be indifferent to them: that’s the essence of inhumanity.”

36. “Silence is the most perfect expression of scorn.” ~ George Bernard Shaw Quotes

38. “Better keep yourself clean and bright; you are the window through which you must see the world.” ~ George Bernard Shaw Quotes

40. “There are two tragedies in life. One is to lose your heart’s desire. The other is to gain it.” ~ George Bernard Shaw Quotes

If you liked 40 Remarkable George Bernard Shaw Quotes, then you might also enjoy:

Share
Facebook
Twitter
Pinterest
WhatsApp
Previous article50 Brutally Honest Charles Bukowski Quotes on People, Love, Women, Art, Sadness & Death
Next article50 Best Pregnancy Quotes to Celebrate the Joy of New Moms
Pragati Chauhanhttp://melodyofwords.com
I am a soulful woman who loves to conjure up my thoughts and write. I thoroughly enjoy creating art and expressing myself through words. I believe words have a certain kind of melody that can be understood by everybody.
RELATED ARTICLES
Kindness and Peace Quotes