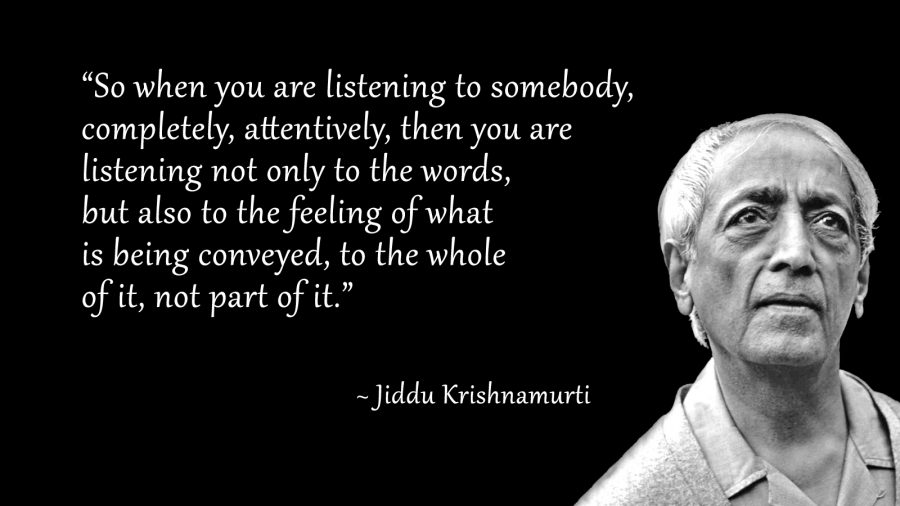 Jiddu Krishnamurti nicknamed as “K” by his beloved audience, was one of the greatest philosophical and spiritual figures of the 20th-century.

Unlike other public figures, who call themselves mystics and deluded people will their ideologies. Krishnamurti who was born in a minion village of Southern India never played this game.

K was a simple man, who believed in the potential of the human mind, and wanted us to be unconditionally free.

In today’s quote journal, I’ll share some titbits of rare J. Krishnamurti Quotes. Before starting with it, let’s learn about the “most underrated philosopher and teacher of life” J. Krishnamurti himself.

J. Krishnamurti “A Philosopher of his own Kind”

During his lifetime, Krishnaji travelled around the world for nearly sixty years. While doing so, he addressed new audiences, met new people, and participated in debates with great thinkers.

Some of of the best discourses of Krishnamurti are on the– Nature of Mind, Thoughts, What is Love, Human Conditioning, and on the Need for a Psychological Revolution.

So as a random person on this random planet, learning from my randomness. I have found some truth bombs in Krishnamurti’s quotes and teachings that need to be pondered upon.

If you too are a seeker of knowledge like me. Then you’ll love these Rare J. Krishnamurti Quotes on Human Conditioning and Suffering.

“All of us have been trained by education and environment to seek personal gain and security and to fight for ourselves. Though we cover it over with pleasant phrases, we have been educated for various professions within a system which is based on exploitation and acquisitive fear.”— Krishnamurti Quotes

“To transform the world, we must begin with ourselves; and what is important in beginning with ourselves is the intention. The intention must be to understand ourselves and not to leave it to others to transform themselves or to bring about a modified change through revolution, either of the left or of the right. It is important to understand that this is our responsibility, yours and mine.”

If you begin to understand what you are without trying to change it, then what you are undergoes a transformation.— Krishnamurti Quotes

“What is needed, rather than running away or controlling or suppressing or any other resistance, is understanding fear; that means, watch it, learn about it, come directly into contact with it. We are to learn about fear, not how to escape from it.”

“In oneself lies the whole world and if you know how to look and learn, the door is there and the key is in your hand. Nobody on earth can give you either the key or the door to open, except yourself.”— Krishnamurti Quotes

“Have you ever asked yourselves what you are going to do when you grow up? In all likelihood you will get married, and before you know where you are, you will be mothers and fathers; and you will then be tied to a job, or to the kitchen, in which you will gradually wither away. Is that all that your life is going to be?”

“A consistent thinker is a thoughtless person, because he conforms to a pattern; he repeats phrases and thinks in a groove.”— Krishnamurti Quotes

Check out: 30 Profound Quotes by Jiddu Krishnamurti on the Nature of Mind and Life

“Do not think about yourself, but be aware of the thought, emotion, or action that makes you think of yourself.”— Krishnamurti Quotes

“The ending of sorrow is the beginning of wisdom. Knowledge is always within the shadow of ignorance. Meditation is freedom from thought and a movement in the ecstasy of truth. Meditation is explosion of intelligence.”

The constant assertion of belief is an indication of fear.— Krishnamurti Quotes

“The end is the beginning of all things, suppressed and hidden, awaiting to be released through the rhythm of pain and pleasure.”— Krishnamurti Quotes

“And the point is, is it possible for the mind to be totally free from suffering and yet not become indifferent, callous, irresponsible, but to have that passion, the intensity, the energy that freedom brings, freedom from suffering.”

“From these prejudices there arises conflict, transient joys and suffering. But we are unconscious of this, unconscious that we are slaves to certain forms of tradition, to social and political environment, to false values.”

“Without freedom from the past, there is no freedom at all, because the mind is never new, fresh, innocent.”— Krishnamurti Quotes

“Human beings, each one, right through the world, go through great agonies, the more sensitive, the more alert, the more observant, the greater the suffering, the anxiety, the extraordinary sense of insoluble problems.”

“Sorrow is not in death but in loneliness, and conflict comes when you seek consolation, forgetfulness, explanations, and illusions.”— Krishnamurti Quotes

Check out: J. Krishnamurti’s Quotes on Love, Freedom & the Importance of Human Relationships

“Begin where you are. Read every word, every phrase, every paragraph of the mind, as it operates through thought.”— Krishnamurti Quotes

“When we talk about understanding, surely it takes place only when the mind listens completely – the mind being your heart, your nerves, your ears – when you give your whole attention to it.”

When one loses the deep intimate relationship with nature, then temples, mosques and churches become important.— Krishnamurti Quotes

“What is needed, rather than running away or controlling or suppressing or any other resistance, is understanding fear; that means, watch it, learn about it, come directly into contact with it. We are to learn about fear, not how to escape from it.”

“The mind has to be empty to see clearly.”— Krishnamurti Quotes

Hope you enjoyed reading some of these mind altering rare J. Krishnamurti quotes, that share wisdom.