The buzz about bumblebee’s, cute butts is all over the internet these days. I too have found them to be irresistible–unless they sting you. Needless to say, I have been the victim of our beloved pollinators several times. After which, my mind became immune to the pain and sensation felt afterwards.

But damn, cute pictures of bumblebee butts could pose a threat to Kim K. The perfectly round, fuzzy bottoms of bumblebees. Hovering in the sky and shooting on the flowers, have been captured by the shutterbugs.

I’m sure watching their pictures, will melt your heart right away. But first, let’s educate ourselves and learn more about these majestic creatures.

India, Home to 48 species of Bumblebees:

Bumblebee is one among the 250 species found in the genus Bombus, part of Apidae, one of the bee families.

These fuzzballs make one of the most economically, and ecologically important insects on the planet. India itself is home to 48 of the 250 known species of bumblebees.

Don’t miss this: 12 Reasons why Rabbits are the Cutest Badass Pets + Tales of my Pet Rabbits

Bumblebees as the only active Pollinators in the High altitude regions:

The nectar loving bumblebees are the only pollinators for the vegetation, sprawling in the high altitude regions.

This has been revealed in a recent publication, Indian Bumblebees. Written by entomologist M.S. Saini and co-authored by Rifat H. Raina and Harpreet Singh Ghator.

The book enlists all 48 species found in India, which is the result of 16 years of hard work.

Bumblebees can be characterised by black, yellow and reddish body hair, and are often striped.

They are generally found at altitudes ranging from, 2,000-15,000 feet, along the entire Himalayas from Jammu & Kashmir to Nagaland.

“Bumblebees are important to the ecosystem, without them seed setting and fruiting, will not take place in many plants. They pollinate vegetables, fruit trees, cash crops and even ornamental and medicinal plants, high in the Himalayas,” cites Mr. Saini, the author of the book Indian Bumblebees.

Do check out: Cutest Pictures of Ducklings that’ll Prove they can Express Anything

About the Queen Bee:

Like the honeybees, bumblebees are social insects. They form colonies with a single queen— the size of which depends on the species.

However, the colonies formed by bumblebees are smaller as compared to those of honeybees, growing to as few as 50 individuals in a nest. A female bumblebee can sting repeatedly, but they usually ignore humans and animals.

“The founder of the colony is the queen that hibernates throughout winter. In spring, she finds a site for a new nest. Having mated the previous autumn, she then lays her eggs which will result in the first batch of workers,” said Mr. Saini, explaining the life cycle of the bumblebees.

How to Identify a Bumblebee:

Bumblebees have round bodies, covered in soft hair (long branched setae) called “pile”. This makes them appear and feel fuzzy.

Bumblebees have unique aposematic (warning) coloration, often consisting of contrasting bands of colour. They are bigger and fluffier than their cousin, honeybees.

Generally, male bumblebees have fuzzy, hairy hind legs that stick the pollen grains, making it easy to transport. Unlike honeybees, bumblebees don’t have a pollen basket.

Though female cuckoo bees also have hairy hind legs, so beware as they can deliver a nasty sting. Thick hair enables bumblebees to forage and pollinate flowers in winters when it’s too cold for honeybees.

Now you’ve enough. So let’s check out the Cutest Pictures of Bumblebee’s butts making rounds on the internet. 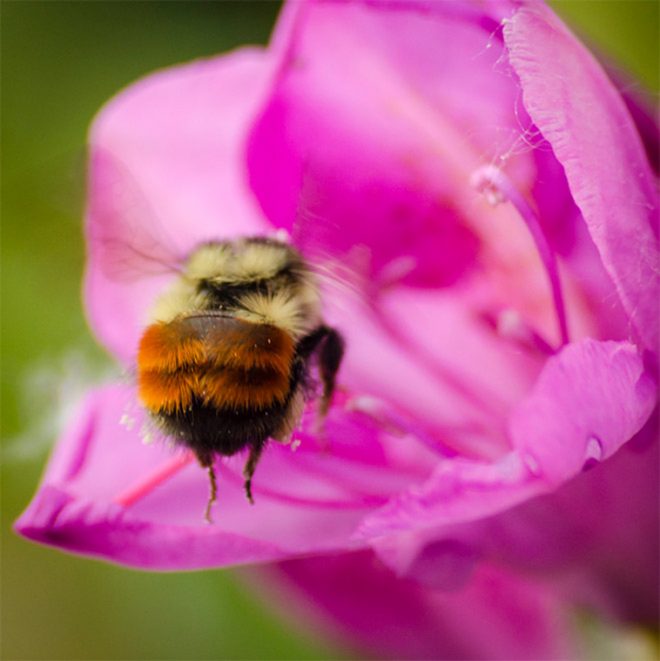 I am a fairy, wearing a striped tee. Mr. Bombastic, he is fantastic. Digging in it like a champ. Feels like this one is shy. We won’t bother you, little buddy. Redbull, it gives you wings.

STATUTORY WARNING: This little guy doesn’t promote the drink. He only wants you to plant more flowering trees. This is how a busy bee looks like. Thank you for pollinating the flowers, little bee.

This one is a caterpillar disguised as a bee. 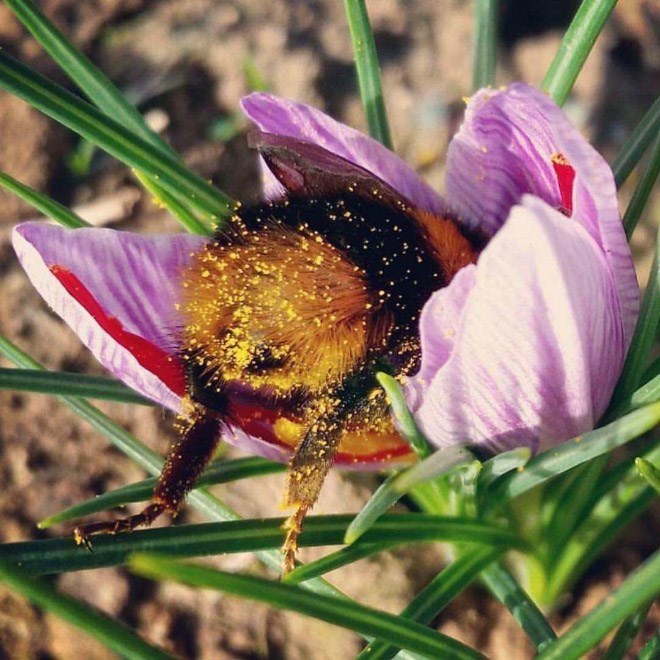 Queen of Cheery blossoms. Look at her pose, them pretty legs. Little miss Muffet, she sat on a tuffet, sipping the nectar away. 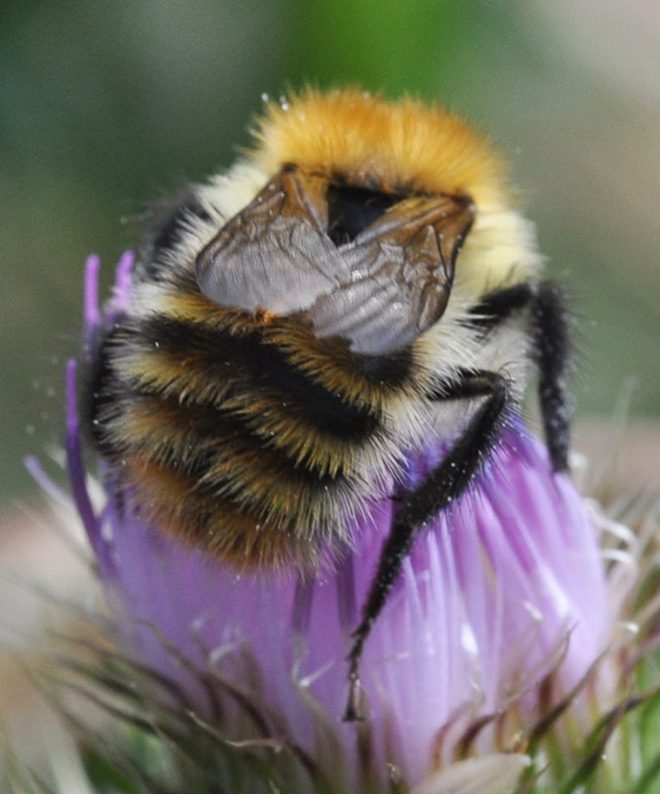 I like this shade of purple. Yay! it’s mine. Look at her butt… Little pollinator at work. 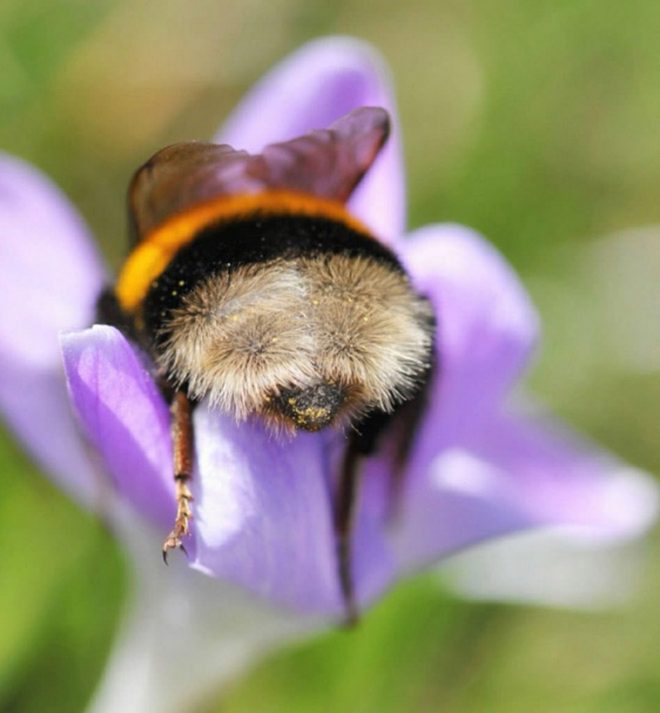 Bumble bee with a bumble bum.

That’s all folks! Now make sure you plant more flowers in your garden and do your bit for the bees. Save bees, save earth.

Let they spirit be high in love. Namaste