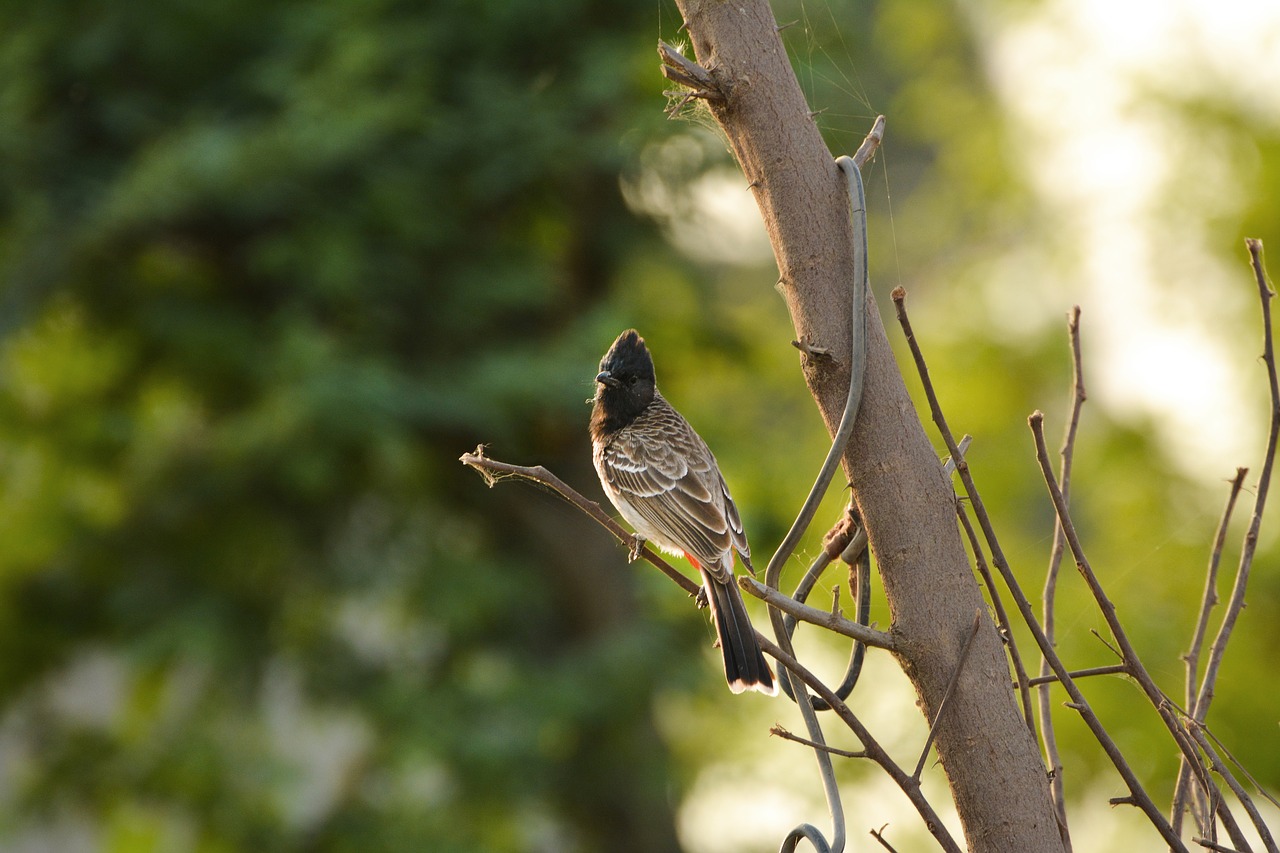 The red-vented bulbul, member of the bulbul family of passerines is a commonly spotted bird in India. These resident birds even survive in cities and have been living with us in harmony for a long time. Earlier, people used to keep them as pets, enclosed in cages.

In some parts of the country, these birds were made to fight with their feet tied to a string. I’m not sure whether this evil practise is still prevalent or not. But if it is, then it needs to stop. There is no joy in seeing another being in pain.

Also read: Sparrows of the Dawn- Studying the behaviour of Birds

I have been closely observing bulbuls from a couple of years and have found them to be quite dexterous. Not just this, they are masters at craftsmanship, as one can see their intricately designed nests. If you are unaware of their nesting pattern. You’ll be intrigued by their engineering skills. As bulbuls occasionally build its nest inside houses or in a hole in a mud bank.

The eggs are incubated for 10-15 days, either by mother bulbul or by both bird parents. I have seen bulbuls building mud nests in the traditional Pahadi houses in the hills. But haven’t seen them showcasing their artistic skills here in the city.

Maybe the birds know that denizens living in the mad rush of cities are attached to their homes. They get trapped in the glitz of the materialistic world and shoo the birds away, that sing for them. Gladly, I have had the privilege of watching bulbuls in action, making a home for their young one’s arrival.

The red-vented bulbul is found in abundance in the Himalayas, especially in the lush-green hilly areas of Uttarakhand. The climate of Dehradun also favours them. Hence, the honeyed calls of these fluffy songbirds echo in the valley.

The curious case of a Bulbul Couple who vanished in the Monsoon mist:

Last year amid Monsoon season, a red-vented bulbul couple visited our veranda quite often. The couple used to perch on the passion vine and upheld acoustic communication, hitting melodious tunes. Soon they noticed a planter, drilled into the wall and decided to build their nest in it.

The couple bought twigs, hay, wool, and cotton to make a comfy home. Even though the planter wasn’t hanging at an impressive height and one could easily touch it. But the birds had faith in us because we never tried to intrude their space. Neither do we try to touch or take pictures of birds, when they are galloping in the lawn.

We usually stay away from them, as much as possible. This has helped in gaining their trust, which is evident from the way bulbuls flutter and play around us. So the couple carried their craft work and made a tiny nest on the planter.

To me, it dawned as a surprise because red-vented bulbuls generally make their nests in bushes, having a height of around 2-3 m (6.6- 9.8 feet). These olive-brown, feathery beauties generally lay two or three eggs.

Mama Bulbul and her World inside the Nest:

Within 5 to 7 days, when the nest was ready, the lady bulbul took charge of it and snuggled inside. Bulbuls generally make two types of nest as discussed above. One which is made from twigs, roots, hay, and cobwebs and the other that is made from mud.

Sadly, I have seen these passerines stuffing plastic in their beaks to weave their nest. Which can be hazardous as chipping off the polythene, may result in choking. This is one of the many reasons to ban plastic and its by-products. When the mother bird was inside the nest, she didn’t move an inch and only budged, when she had to forage for food.

You might be wondering what do Bulbuls eat, so here’s the deal:

The diet of a red-vented Bulbul usually consists of a mix of insects, small vertebrates, flowers, fruits, seeds, and nectar. Once while engrossed in nature observation, I found the couple slurping an earthworm like a noodle. The birds did enjoy their feast. As soon after, they took an enthusiastic flight into the ethereal sky.

The Sacred Bonding of a Bulbul couple:

The monsoon wind bore the aroma of the earthy mist. Now the couple was determined to welcome a new life. The father bulbul was always on duty, guarding his home against the predators. When mother bulbul used to incubate her eggs, he made sure his ladybird was safe.

He used to appear from nowhere, catching a glimpse of her from the climber, overlooking the planter. Maybe, he wanted to make his lady feel assured of his duty as a young father. Two weeks went by and I was left with memories of mother bulbul, sitting calmly inside her nest, gazing at the flora outside. The couple was nowhere to be found as they had vanished in the Monsoon mist.

Woosh! they were gone.

I missed them and wondered what could have happened. We never saw their youngling, neither did we hear the chirps of the little ones. I was hoping, they’ll return the other day or day after tomorrow. But nothing like that happened. The planter was empty and the artificial flowers were hanging from it, like plants wilting in the heat.

How do the eggs of Red-vented Bulbuls look like:

Accepting nature’s course, I blended well with my daily routine. Soon the yearly fiesta of Diwali started and so began the cleaning and renovation work. One day, while cleaning the planter I saw the nest of bulbul, which was still secured and inside it was the shell of Bulbul’s egg.

The eggs were pale pinkish in colour with reddish-brown spots sprayed on it. The botches on the egg were irregular and got denser at the broad end.

Can you solve the Mystery of the Bulbul couple?

What came as a surprise was there were only two pieces of the eggshells. So basically it was one egg. While red vented bulbuls generally lay eggs in a typical clutch of two or three. And if the shell was broken, what could have happened to the chick?

Here are my assumptions:

Did it fly away with its parents or the baby chick couldn’t make it or the egg was infertile? Though research suggests, when birds lay infertile eggs, they incubate it along with the fertile ones. Though, the infertile egg does not hatch. But in the case of the bulbul couple, the broken pieces of eggshells hinted something else.

The egg hatched or the bird repeatedly pecked on it, resulting in damage. Hence, it broke into pieces. These are my assumptions, what do you think could have happened? I’m still wondering if the chick made it into this world, how did its parents manage to secretly feed their youngling. My mind is still working on solving the mystery of the bulbul couple. Hope they are somewhere safe, living under the shade of a peepal tree.