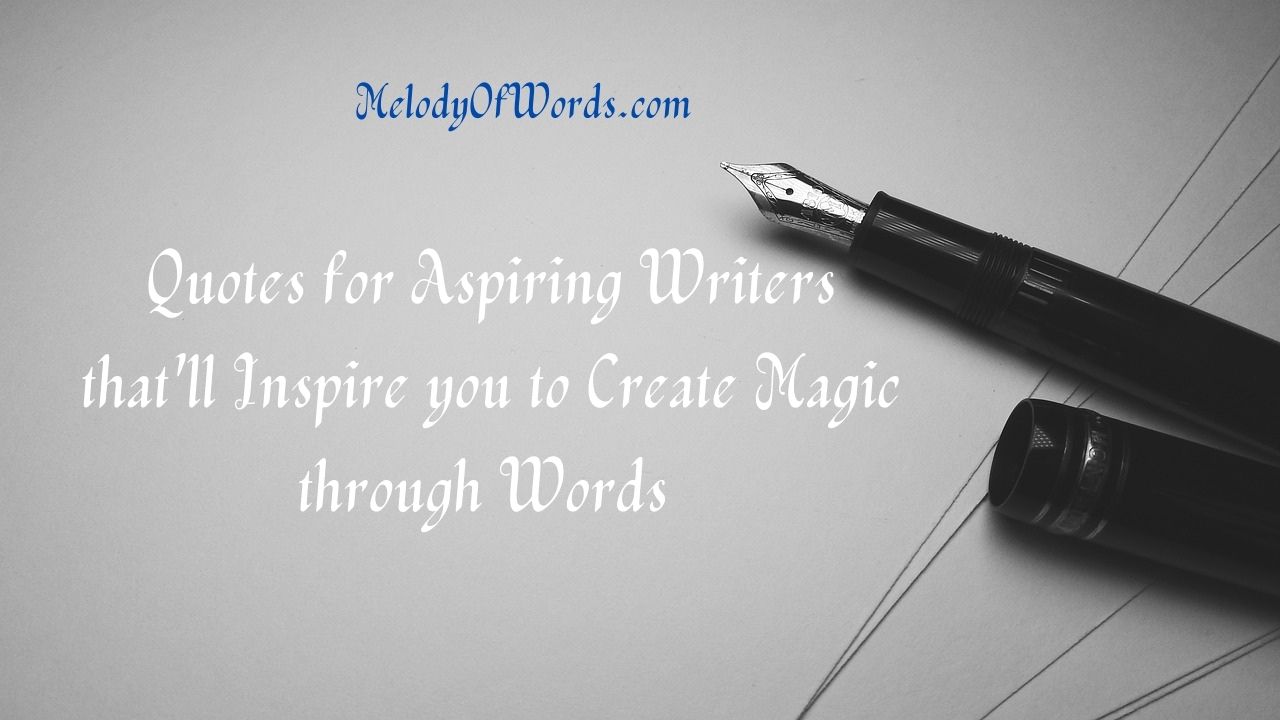 Quotes on Writers that’ll Inspire you to Create Magic through Words:

Only writers can understand the pain and agony of sitting patiently in front of the computer, waiting for inspiration to hit and the words to flow from your mind. While on good days, they can be lucky enough to experience the joy of having words woven with melody, melt from their mind like butter.

Some days, a writer can be artistic, expressive and visionary while on other days, he can be a blank canvas. Sitting idly, staring at the screen of his laptop in total disappointment. Which warns you that yet another day has been wasted in procrastinating.

This is why creative people seek inspiration from time to time. Whether it comes naturally through observation or by reading some great works of prominent writers.

So if you are a writer who is in a dilemma, whether or not you should take a break. Or spend time with the lonely-dusty books, kept on the shelf that might inspire you to write fiercely.

Then you are at the right place. Because we have compiled some of the best inspirational quotes on writers like you, that’ll inspire you to create magic through words.

1. “Who wants to become a writer? And why? Because it’s the answer to everything… It’s the streaming reason for living. To note, to pin down, to build up, to create, to be astonished at nothing, to cherish the oddities, to let nothing go down the drain, to make something, to make a great flower out of life, even if it’s a cactus.” – Enid Bagnold

2. “We are all apprentices in a craft where no one ever becomes a master.” – Ernest Hemingway

3. “If a nation loses its storytellers, it loses its childhood.” – Peter Handke

4. “For your born writer, nothing is so healing as the realization that he has come upon the right word.” – Catherine Drinker Bowen

5. “The greatest part of a writer’s time is spent in reading, in order to write; a man will turn over half a library to make one book.” – Samuel Johnson, Quotes on Writers

6. “Each writer is born with a repertory company in his head. Shakespeare has perhaps 20 players… I have 10 or so, and that’s a lot. As you get older, you become more skillful at casting them.” – Gore Vidal, Quotes on Writers

7. “We’re past the age of heroes and hero kings… Most of our lives are basically mundane and dull, and it’s up to the writer to find ways to make them interesting.” – John Updike

Also Read: What Happens when an Introvert Writes | Inside the Mind of an Introverted Writer

8. “So you want to be a writer, if it doesn’t come bursting out of you in spite of everything, don’t do it.” – Charles Bukowski

10. “He asked, What makes a man a writer? Well, I said, it’s simple. You either get it down on paper, or jump off a bridge.” ~ Quotes on Writers

11. “The worst thing for a writer is to know another writer, and worse than that, to know a number of other writers. Like flies on the same turd.”

12. “It was best to stay away from other writers and just do your work…” ~ Quotes on Writers

13. “I’m just an alcoholic who became a writer so that I would be able to stay in bed until noon.”

It was almost nonexistent, invisible. But you could be sure that the worst writers had the most confidence, the least self-doubt. Anyway, writers were to be avoided, and I tried to avoid them, but it was almost impossible. They hoped for some sort of brotherhood, some kind of togetherness. None of it had anything to do with writing, none of it helped at the typewriter.”

Inspirational and Motivational Quotes for Writers:

18. “You have to write the book that wants to be written. And if the book will be too difficult for grown-ups, then you write it for children.” – Madeleine L’Engle

20. “A writer is someone for whom writing is more difficult than it is for other people.” – Thomas Mann

21. “The purpose of a writer is to keep civilization from destroying itself.” – Albert Camus

23. “A good writer possesses not only his own spirit but also the spirit of his friends.” – Friedrich Nietzsche

25. “Genius gives birth, talent delivers. What Rembrandt or Van Gogh saw in the night can never be seen again. Born writers of the future are amazed already at what they’re seeing now, what we’ll all see in time for the first time, and then see imitated many times by made writers.” – Jack Kerouac, Quotes on Writers

Also Read: J. Krishnamurti Quotes from the Book “Freedom From The Known”

27. “Anyone who is going to be a writer knows enough at 15 to write several novels.” – May Sarton

28. “When writing a novel a writer should create living people; people, not characters. A character is a caricature.” – Ernest Hemingway

29. “Write while the heat is in you… The writer who postpones the recording of his thoughts uses an iron which has cooled to burn a hole with.” – Henry David Thoreau

30. “Everybody walks past a thousand story ideas every day. The good writers are the ones who see five or six of them. Most people don’t see any.” – Orson Scott

31. “Most writers regard the truth as their most valuable possession, and therefore are most economical in its use.” – Mark Twain

32. “If you wait for inspiration to write you’re not a writer, you’re a waiter.” – Dan Poynter

33. “Everywhere I go, I’m asked if the universities stifle writers. My opinion is that they don’t stifle enough of them.” – Flannery O’Connor

34. “Being a writer is a very peculiar sort of job: It’s always you versus a blank sheet of paper (or a blank screen) and quite often the blank piece of paper wins.” – Neil Gaiman, Quotes on Writers

35. “I would advise any beginning writer to write the first drafts as if no one else will ever read them – without a thought about publication – and only in the last draft to consider how the work will look from the outside.” – Anne Tyler

36. “I believe myself that a good writer doesn’t really need to be told anything except to keep at it.” – Chinua Achebe, Quotes on Writers

37. “The secret to being a writer is that you have to write. It’s not enough to think about writing or to study literature or plan a future life as an author. You really have to lock yourself away, alone, and get to work.” – Augusten Burroughs, Quotes on Writers

38. “It is by sitting down to write every morning that one becomes a writer.” – Gerald Brenan, Quotes on Writers

39. “Any man who keeps working is not a failure. He may not be a great writer, but if he applies the old-fashioned virtues of hard, constant labor, he’ll eventually make some kind of career for himself as a writer.” – Ray Bradbury

40. “A professional writer is an amateur who didn’t quit.” – Richard Bach

41. “So the writer who breeds more words than he needs, is making a chore for the reader who reads.” – Dr. Seuss

43. “Each writer is born with a repertory company in his head. Shakespeare has perhaps 20 players. I have 10 or so, and that’s a lot. As you get older, you become more skillful at casting them.” – Gore Vidal

44. “A writer never has a vacation. For a writer life consists of either writing or thinking about writing.” – Eugene Ionesco

45. “Exercise the writing muscle every day, even if it is only a letter, notes, a title list, a character sketch, a journal entry. Writers are like dancers, like athletes. Without that exercise, the muscles seize up.” – Jane Yolen, Quotes on Writers

47. “I tell writers to keep reading, reading, reading. Read widely and deeply. And I tell them not to give up even after getting rejection letters. And only write what you love.” – Anita Diamant

48. “An absolutely necessary part of a writer’s equipment, almost as necessary as talent, is the ability to stand up under punishment, both the punishment the world hands out and the punishment he inflicts upon himself.” – Irwin Shaw, Quotes on Writers

49. “Every secret of a writer’s soul, every experience of his life, every quality of his mind, is written large in his works.” – Virginia Woolf

51. “If I had to give young writers advice, I would say don’t listen to writers talking about writing or themselves.” – Lillian Hellman, Quotes on Writers

If you liked Quotes on Writers, then you might enjoy: