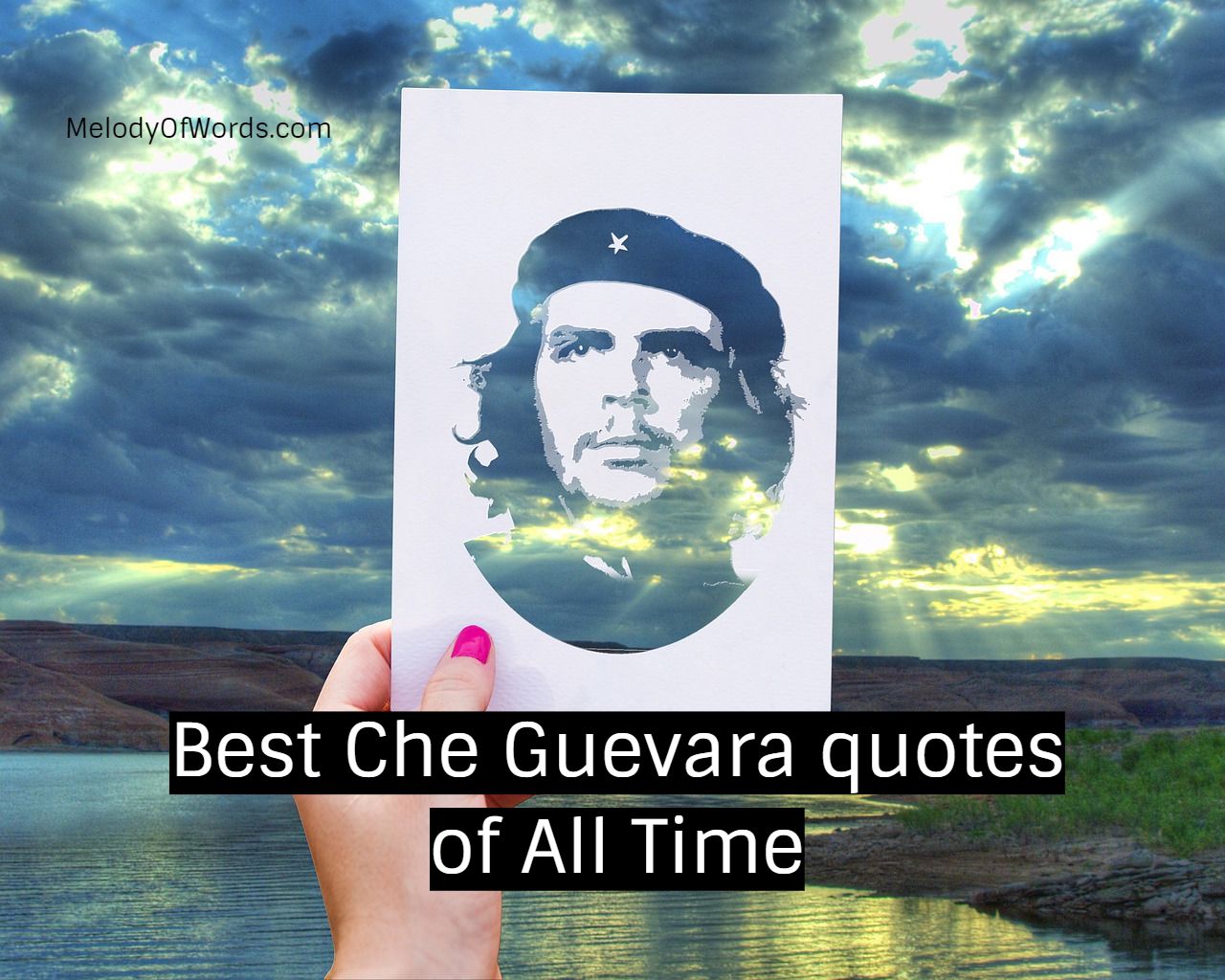 Che Guevara is one of the cult figures worshipped by the Marxists, who idealize him as a great revolutionary. Guevara fought for the Cuban Revolution and went on to become a guerrilla leader in South America.

In 1967, he was executed by the Bolivian army, as they feared if Che would be interrogated or called for a public trial. He would garner heavy support and sympathy from the public.

After his death, he was idealized as a revolutionary martyr by the Cubans and highly revered by the radical thinkers and activists. His iconic image printed in tees and caps is seen as a symbol of rebellion and change by the youngsters.

A Glimpse of Che Guevara’s Life and History:

Ernesto “Che” Guevara born on 14 June, 1928 was an Argentine Marxist revolutionary, physician, author, guerrilla leader, diplomat and military theorist. Che’s legacy continues to this day and he is still celebrated as an icon of leftist radicalism and anti-imperialism.

As a young medical student, Guevara travelled a lot and explored the heavily poverty stricken areas of South America.

He was so appalled by the hunger and exploitation of the Latin Americans by the US, that he decided to bring a change. His action plan included his involvement in Guatemala’s social reforms under President Jacobo Arbenz.

In 1955, Che extended his support to Cuban revolutionary Fidel Castro and helped him in dismantling Batista’s government in Cuba. Guevara became the military advisor to Castro and led guerrilla troops in battles against Batista forces.

He later rose as the president of the Cuban national bank, and shifted the country’s trade relations from the US to the Soviet Union.

On December 11, 1964, while addressing the United Nations Assembly Che Guevara expressed his desire to support the people of Puerto Rico. A year later, he became the minister of the industry in 1965, he resigned from his post to spread the idea of Cuban revolution to other parts of the world.

In 1966, he started inciting Bolivians to revolt against their government but found no success. Since he had a small troop of Guerrilla force by his side. Ultimately, he was hunt down by the Bolivian army with the support of CIA advisers and was finally executed on October 9, 1967 in La Higuera.

Posthumously, he became a celebrated political figure, a icon for rebellion, revolution and socialism. For many, Guevara still continues to be the symbol of change and hope.

His strong personality has enticed many young film makers and authors to work on it. His life and journey from a medical student to a rebel has been portrayed in numerous books and films including “The Motorcycle Diaries” (2004).

Let’s go through some of the timeless Che Guevara quotes and breakdown his political and social views.

1. “We cannot be sure of having something to live for unless we are willing to die for it.”

2. “The revolution is not an apple that falls when it is ripe. You have to make it fall.”

3. “I am not a Liberator. Liberators don’t exist. The people liberate themselves.”

4. “I don’t care of I fall as long as someone else picks up my gun and keeps on shooting.”

6. “The true revolutionary is guided by a great feeling of love. It is impossible to think of a genuine revolutionary lacking this quality.” – Inspirational Che Guevara quotes

7. “Silence is a continuation of dispute by other means.”

8. “Everyday you have to fight so that love for humanity can be transformed into concrete deeds, into acts that set an example, that mobilize.”

9. “I will always dream and will never stop until I am dead.”

10. “The walls of the educational system must come down. Education should not be a privilege, so the children of those who have money can study.”

11. “Those who kill their own children and discriminate daily against them because of the color of their skin; those who let the murderers of blacks remain free, protecting them, and furthermore punishing the black population because they demand their legitimate rights as free men – how can those who do this consider themselves guardians of freedom?” – Inspirational Che Guevara quotes

12. “The life of a single human being is worth more than all property of the richest man on earth.”

14. “Words without deeds are worthless.”

15. “At the risk of seeming ridiculous, let me say that the true revolutionary is guided by a great feeling of love. It is impossible to think of a genuine revolutionary lacking this quality.”

16. “To accomplish much you must first lose everything.”

17. “I would rather die standing up to live life on my knees.”

18. “Justice remains the tool of a few powerful interests; legal interpretations will continue to be made to suit the convenience of the oppressor powers.”

19. “I could become very rich in Guatemala but by the low method of ratifying my title, opening a clinic, and specializing in allergies. To do that would be the most horrible betrayal of the two ‘I’s’ struggling inside me: the socialist and the traveler.” – Inspirational Che Guevara quotes

20. “Above all, always be capable of feeling deeply any injustice committed against anyone, anywhere in the world. This is the most beautiful quality in a revolutionary.”

21. “The Revolution is made by man, but man must forge his revolutionary spirit from day to day.”

22. “If you become furious with every injustice, then you are my friend.”

23. “The world must not only be interpreted, it must be transformed. Man ceases to be the slave and tool of his environment and converts himself into the architect of his own destiny.” – Inspirational Che Guevara quotes

24. “If you tremble with indignation at every injustice, then you are a comrade of mine.”

27. “It is unnecessary to say that Fidel Castro possesses the high qualities of a fighter and statesman: our path, our struggle, and our triumph we owed to his vision.”

28. “A new era will dawn in Africa, when the impoverished masses of a nation rise up to rescue their right to a decent life from the hands of the ruling oligarchies.”

30. “I had a project for my life which involved 10 years of wandering, then some years of medical studies and, if any time was left, the great adventure of physics.” – Revolutionary Che Guevara quotes

31. “Passion is needed for any great work, and for the revolution, passion and audacity are required in big doses.”

32. “Remember that the revolution is what is important, and each one of us, alone, is worth nothing.”

33. “One must have a large dose of humanity, a large dose of a sense of justice and truth in order to avoid dogmatic extremes, cold scholasticism, or an isolation from the masses. We must strive every day so that this love of living humanity is transformed into actual deeds, into acts that serve as examples, as a moving force.”

34. “And then many things became very clear… we learned perfectly that the life of a single human being is worth millions of times more than all the property of the richest man on earth.” – Revolutionary Che Guevara quotes

35. “The peasant must always be helped technically, economically, morally and culturally. The guerrilla fighter will be a sort of guiding angel who has fallen into the zone, helping the poor always and bothering the rich as little as possible in the first phases of the war.”

36. “How easy it is to govern when one follows a system of consulting the will of the people and one holds as the only norm all the actions which contribute to the well being of the people.” – Revolutionary Che Guevara quotes

37. “Above all, try always to be able to feel deeply any injustice committed against any person in any part of the world. It is the most beautiful quality of a revolutionary.” – Revolutionary Che Guevara quotes

38. “Many will call me an adventurer – and that I am, only one of a different sort: one of those who risks his skin to prove his platitudes.”

40. “I am one of those people who believes that the solution to the world’s problems is to be found behind the Iron Curtain.”

42. “The merit of Marx is that he suddenly produces a qualitative change in the history of social thought. He interprets history, understands its dynamic, predicts the future, but in addition to predicting it (which would satisfy his scientific obligation), he expresses a revolutionary concept: the world must not only be interpreted, it must be transformed. Man ceases to be the slave and tool of his environment and converts himself into the architect of his own destiny.”

43. “The guerrilla fighters should be required to go to bed and get up at fixed hours. Games that have no social function and that hurt the morale of the troops and the consumption of alcoholic drinks should both be prohibited.” – Revolutionary Che Guevara quotes

45. “Cruel leaders are replaced only to have new leaders turn cruel.”

46. “Study hard so that you can master technology, which allows us to master nature.” – Revolutionary Che Guevara quotes

If you liked Che Guevara quotes, the you might also enjoy: