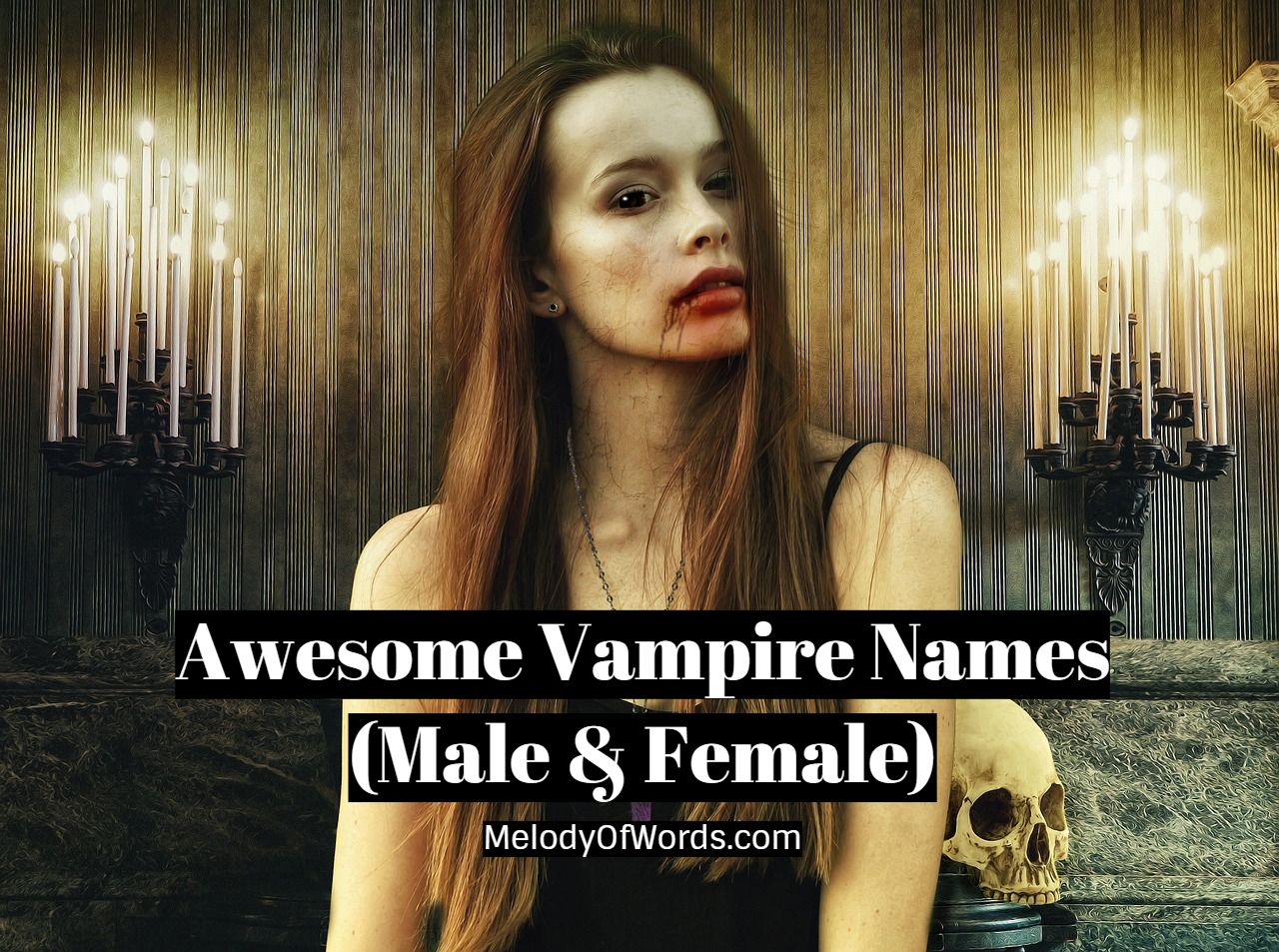 It doesn’t matter if vampires exist only in fantasy, movies, and fictional stories, as we all are obsessed with them. We just love these supernatural beings and their stories. Be it the “Twilight” movie and novel series or “The Vampire Diaries” TV series or the “The Originals” TV show, we all love them.

Stories about these blood-sucking beings have been told in Eastern Europe for centuries, and people believed that these creatures exist in real life. There’s a popular belief that, vampires suck out blood from humans, using their sharp fangs and kill them, eventually turning them into vampires.

Legends say that, vampires hunt only at night because sunlight weakens their powers. They are often good-looking and have attractive body features.

“Melody of Words” brings to you, the best vampire names from popular culture, and some lesser-known but elegant male and female vampire names as well.

Take a look at this list of awesome vampire names to bring these supernatural beings into life this Halloween or even to name a new-born baby:

1. Damon Salvatore: A popular name from the world famous TV show “The Vampire Diaries”. meaning “subdue” or “to tame”. It is of Greek origin. The name Damon is known and loved by everyone all over the world because of the massive fanbase of the vampire character played by Ian Somerhalder. It is one of the most hot and popular vampire names.

2. Stefan Salvatore: Another Greek originated vampire name meaning “crown”. Another beloved vampire character from “The Vampire Diaries”. Damon and Stefan are brothers. The character is portrayed by Paul Wesley.

3. Elena Gilbert: This name is of Italian origin and it is another character of the TV show “The Vampire Diaries”. Damon and Stefan both are in love with Elena, who later on turns into a vampire. It is played by Nina Dobrev.

4. Niklaus Mikaelson: Popular character from the TV shows “The Originals” and “The Vampire Diaries”. It is played by Joseph Morgan.

5. Elijah Mikaelson: He is the elder brother of Niklaus Mikaelson. It is played by Daniel Gillies.

6. Rebekah Mikaelson: She is the younger sister of Elijah and Niklaus Mikaelson, who was born in October 30th, 984. It is played by Claire Holt.

7. Marcel Gerard: Another character from “The Originals” played by Charles Michael Davis.

9. Caroline Forbes: Another character from “The Vampire Diaries” played by Candice King.

10. Katherine Pierce: The doppelganger of Elena Gilbert, played by Nina Dobrev. She was turned into a vampire on April 6th, 1492 by Rose-Marie. The name Katherine comes from the Greek word “katharos” that means “pure.”

13. Bella Swan: A popular character from the Twilight novel and the movie. It is portrayed by Kristen Stewart. This is one of the most popular and suitable vampire names for girls.

14. Edward Cullen Another beloved character from the “Twilight” novel and the movie. He is the love interest of Bella Swan and it is played by Robert Pattinson.

15. Blade: It is a fictional character from the movie “Blade”.

17. Louis de Pointe du Lac: It is another fictional character from “The Vampire Chronicles”.

18. Dracula: It is probably one of the most famous vampires in pop culture, which first appeared in a novel named “Dracula” by Bram Stoker in 1897 and then 1931 and 1992 movies of the same name made it more popular. Dracula novel was first published in 1897. But the history of these blood-sucking creatures started centuries before Stoker was born.

19. Armand: This name is of French origin that means “army man”. The name made popular by the character in the movie “Interview with the Vampire”.

20. Alice: Alice is a common name of Latin origin that means “noble”. The name made famous by the character played by Ashley Greene in “The Twilight” series.

21. Hades: This is a male name of Greek origin that means “unseen”. It is one of thee most unique sounding vampire names.

22. Marceline: This is a female name of French origin. meaning “young warrior”. It is from the cartoon show “Adventure Time”.

23. Nexus: This is one of the few English origin vampire names, which means “old bind”.

24. Orlok: It has English origin. The name comes from the movie ‘Nosferatu’.

25. Noir: It is an unsex name of French origin meaning “black”.

26. Selene: It is portrayed by Kate Beckinsale in the blockbuster movie “Underworld”. It is one of the most unique vampire names for girls. It has Greek origin, which means “full of light”.

27. Styx: It is an unisex name of Greek origin, which means “the hateful”.

28. Verity: It is a female name of English origin, which means “truth”.

Lesser-Known but Cool Sounding Vampire Names for Girls and Boys:

30. Ambrosia: It is one of the most unique sounding vampire names, meaning “immortality.”

32. Gabriel: This name has Hebrew roots, meaning “God is my strength.”

34. Dawn: It has English origin, this name means “daybreak.”

36. Celeste: It has Latin origin that means “heavenly”.

37. Joshua: This is a Biblical name that means “God is salvation.”

39. Lenora: This name comes from Greece that means “sun ray.”

40. Horace: It has Latin origin that means “timekeeper.”

44. Kenia: It has Welsh origin, it means “the greatest champion.”

46. Delilah: This sweet name has Hebrew origins, it means “languishing”.

47. Damien: This vampire name has French origin that means “to tame” or “subdue.”

48. Athan: This name has Greek roots that means “immortal.”

50. Orpheus: This boy’s name has Greek origin that means “the darkness of the night.”

52. Sabina: This vampire name for girls has Italian origin.

53. Cassius: This vampire name for boys has Latin, that means “hollow.”

54. Zella: It has Yiddish origin, that means “peaceful” or “blessed.”

Also Read: 55 Christian Quotes on Love which Goes beyond the Self

55. Adira: This name has Hebrew origin that means “strong” and “powerful”.

56. Almeta: This name means “ambitious” and has Latin origin.

57. Aletia: It has Greek origin that means “truth”.

58. Ailith: This is one the best vampire names for girls that means “warrior”.

60. Aldith: This English name means “warrior”. This is one of our personal favorite vampire names for girls.

63. Nitya: This name has Indian and Sanskrit origin. It means “eternal”.

67: Aurora: It means “the goddess of dawn”. It has Latin origin.

69. Edra: This is a English name meaning “wealthy”.

70. Coleta: It is a French name meaning “people of victory”.

74. Athan: This is name is also from Greece that means “Eternal life”.

76. Caith: This name has Irish origin that means “From the battleground”.

81. Kadrick: This Scottish name means “From the wetlands”.

82: Klaus: This German name means “Victory to the people”. This was made famous by a character in TV shows “The Originals” and “The Vampire Diaries”.

85. Raphael Santiago: Made famous by the supernatural drama “Shadowhunters”.