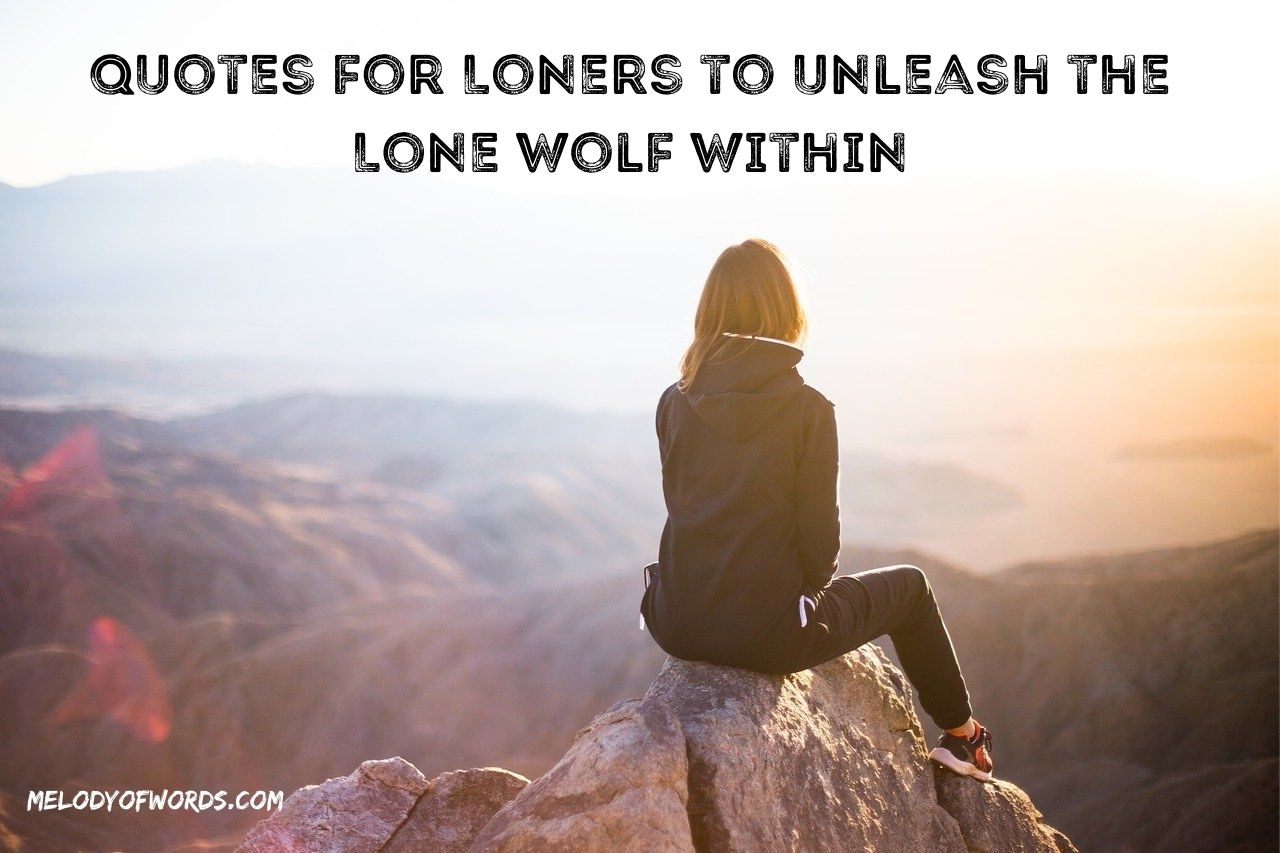 Table of Contents: [Hide]
Who is a Loner:
How a Person becomes a Loner:
40 Best Quotes for Loners to Unleash the Lone Wolf Within

Being alone and enjoying your company is one of the essential personality traits of loners, who derive a sense of pleasure and contentment from spending time alone.

If you want to know, whether you are a loner or not. Then you must read some of these balmy quotes for loners, which are etched straight from the heart by lone wolves. By reading these quotes on loners, you’ll be able to figure out your personality archetype. But before that, let’s dissect the personality of a loner.

Who is a Loner:

A loner is a self-professed hermit, who can live happily without socializing for an indefinite period of time, it could be weeks, months, and even years.

A lone-wolf wouldn’t mind going out or that he/she should call a friend to know— what they’ve been missing out in life. As they don’t get aroused or rejuvenated by external stimuli, they feel happy and relaxed by spending time on their own.

Therefore, they don’t feel guilty or overthink about— what others might be thinking. Since a loner has mentally and physically distanced themselves from the societal obligations.

Such people feel socializing is a distraction, a forced means of bonding, something that they don’t enjoy. Because it doesn’t burst from within and they have to push themselves into into it.

How a Person becomes a Loner:

One doesn’t think or plans to become a loner rather his core personality and life experiences, drives him to follow the lonely road, that is often less trodden and undertaken by the people.

It is generally the realizations, an inner awakening, or love for solitude and the zeal to explore the depths of one’s personality, that persuades a person to be a loner.

Loner lifestyle isn’t for everyone therefore only a few dare to walk this path. As they feel like misfits, who don’t fit into the social spectrum and are most true to themselves, when they are alone.

Therefore, by withdrawing from activities that don’t excite their spirit, loners create their sanctity of peace and wellness.

Some people become loners because it was a predominant part of their personality. Which they were hiding and wished to follow, when they got an opportunity to do so.

While others, who were socially active and loved being the apple of the public eye’s become loners in later life. Due to their bad social experiences, loss of trust from friends, family or relationships and other personal reasons.

In order to clarify your doubt, whether you are a loner or not. Read these insightful quotes on loners, that’ll reveal different shades of their personality. So here are carefully curated, 40 best quotes for loners to unleash the lone wolf within.

40 Best Quotes for Loners to Unleash the Lone Wolf Within

1. “The loner who looks fabulous is one of the most vulnerable loners of all.” – Anneli Rufus

2. “I am completely a loner. In my head I want to feel I can be anywhere. There is a sort of recklessness that being a loner allows me.” – Arundhati Roy

4. “One of the many advantages of being a loner is that often there’s time to think, ponder, brood, meditate deeply, and figure things out to one’s satisfaction.” – Andrea Seigel, Quotes for Loners

5. “Those who understand the true nature of humanity are always loners.” – Dean Cavanagh

6. “My alone feels so good, I’ll only have you if you’re sweeter than my solitude.” – Warsan Shire

7. “Yes, I guess you could say I am a loner, but I feel more lonely in a crowed room with boring people than I feel on my own.” – Henry Rollins

8. “A man can be himself alone so long as he is alone… if he does not love solitude, he will not love freedom; for it is only when he is alone that he is really free.” – Arthur Schopenhauer, Quotes for Loners

10. “Let me tell you this: if you meet a loner, no matter what they tell you, it’s not because they enjoy solitude. It’s because they have tried to blend into the world before, and people continue to disappoint them.” – Jodi Picoult, Quotes for Loners

Also Read: Loving a Lone Wolf: How to keep a Relationship on with a Loner

11. “You only grow when you are alone.” – Paul Newman, Quotes for Loners

12. “I am a drifter, and as lonely as that can be, it is also remarkably freeing. I will never define myself in terms of anyone else.”

13. “I am completely a loner. In my head I want to feel I can be anywhere. There is a sort of recklessness that being a loner allows me.”

14. “I think it’s good for a person to spend time alone. It gives them an opportunity to discover who they are and to figure out why they are always alone.” – Amy Sedaris

15. “People who want to be famous are really loners. Or they should be.” – Katharine Hepburn

16. “Reading requires a loner’s temperament, a high tolerance for silence, and an unhealthy preference for the company of people who are imaginary or dead.” – David Samuels, Quotes for Loners

17. “Be a loner. That gives you time to wonder, to search for the truth. Have holy curiosity. Make your life worth living.” – Albert Einstein

Also Read: Why Long-Distance Relationship can be Great for Introverts, Loners & People with Social Anxiety

18. “It’s the journey of self, I guess. You start with this kind of loner, outside guy, which a lot of people can relate to, and he goes out into the world.” – Keanu Reeves, Quotes for Loners

19. “Deep in my heart I know I am a loner. I have tried to blend in with the world and be sociable, but the more people I meet the more disappointed I am, so I’ve learned to enjoy myself, my family and a few good friends.” – Steven Aitchison, Quotes for Loners

20. “One of the many advantages of being a loner is that often there’s time to think, ponder, brood, meditate deeply, and figure things out to one’s satisfaction.” – Andrea Seigel

22. “Let me tell you this: if you meet a loner, no matter what they tell you, it’s not because they enjoy solitude. It’s because they have tried to blend into the world before, and people continue to disappoint them.” – Quotes for Loners

23. “Most of the time I played by myself. Even then I was a loner, and I have stayed a loner all my life. It can make a man seem a little distant or even aloof – but it has helped pull me through some tight spots and hard times.” – Roy Wilkins, Quotes for Loners

24. “A man can be himself alone so long as he is alone … if he does not love solitude, he will not love freedom; for it is only when he is alone that he is really free.” – Arthur Schopenhauer

Also Read: The Power of Introversion: 8 Qualities of Introverts & How to Benefit from It

25. “He craved silences and solitude. He simply could not get lost in another person’s life.”

26. “If you learn to really sit with loneliness and embrace it for the gift that it is…an opportunity to get to know YOU, to learn how strong you really are, to depend on no one but YOU for your happiness…you will realize that a little loneliness goes a LONG way in creating a richer, deeper, more vibrant and colorful YOU.” – Mandy Hale, Quotes for Loners

27. “I guess I’m pretty much of a lone wolf. I don’t say I don’t like people at all but, to tell you the truth I only like it then if I have a chance to look deep into their hearts and their minds.” – Bela Lugosi

28. “We entrepreneurs are loners, vagabonds, troublemakers. Success is simply a matter of finding and surrounding ourselves with those open-minded and clever souls who can take our insanity and put it to good use.” – Anita Roddick, Quotes for Loners

29. “Every kind of creative work demands solitude, and being alone, constructively alone, is a prerequisite for every phase of the creative process.” – Barbara Powell

30. “Whosoever is delighted in solitude is either a wild beast or a god.” – Aristotle

31. “Although I am a typical loner in my daily life, my awareness of belonging to the invisible community of those who strive for truth, beauty, and justice has prevented me from feelings of isolation.” – Albert Einstein, Quotes for Loners

32. “The best remedy for those who are afraid, lonely or unhappy is to go outside, somewhere where they can be quiet, alone with the heavens, nature and God. Because only then does one feel that all is as it should be.” – Anne Frank, Quotes for Loners

33. “Quiet people always know more than they seem. Although very normal, their inner world is by default fronted mysterious and therefore assumed weird. Never underestimate the social awareness and sense of reality in a quiet person; they are some of the most observant, absorbent persons of all.” – Criss Jami, Quotes for Loners

34. “The mind is sharper and keener in seclusion and uninterrupted solitude. Originality thrives in seclusion free of outside influences beating upon us to cripple the creative mind. Be alone—that is the secret of invention: be alone, that is when ideas are born.” – Nikola Tesla, Quotes for Loners

35. “The hardest thing about being an outcast isn’t the love you don’t receive. It’s the love you long to give that nobody wants. After a while, it backs up into your system like stagnant water and turns toxic, poisoning your spirit. When this happens, you don’t have many choices available. You can become a bitter loner who goes through life being pissed off at the world; you can fester with rage until one day you murder your classmates. Or, you can find another outlet for your love, where it will be appreciated and maybe even returned.” – Jodee Blanco, Quotes for Loners

36. “It is impossible to ostracize a lone wolf.” – Joseph Annaruma

37. “Writing is utter solitude, the descent into the cold abyss of oneself.” – Franz Kafka

38. “I do feel like a loner but I think it’s because I look at things differently than other people.”

39. “All man’s miseries derive from not being able to sit quietly in a room alone.” – Blaise Pascal

40. “Seclusion is the price of greatness.” – Paramahansa Yogananda

If you liked Quotes for Loners, then you might enjoy: